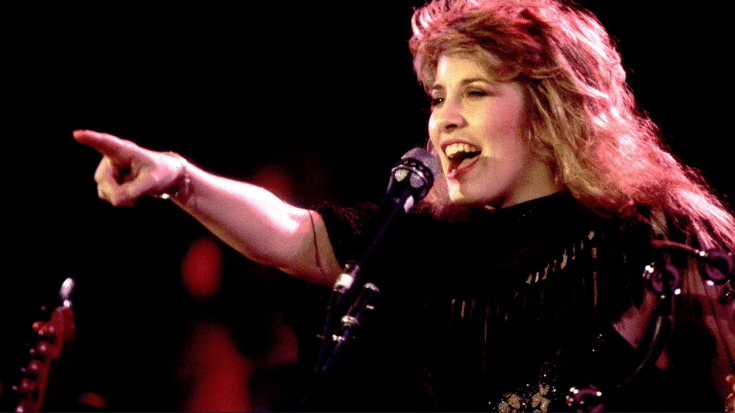 We don’t know her, but Fleetwood Mac songstress Stevie Nicks doesn’t strike us as the kind of woman to be easily surprised by other people. But that’s exactly what happened in 1983, when a spark of inspiration while en route to her California honeymoon resulted in one of the most surprising moments of her career.

As Stevie tells it, her 1983 classic “Stand Back” would never have come to life without having first heard Prince’s “Little Red Corvette”. 35 years old and newly married to now ex-husband Kim Anderson, Nicks was bombing down the freeway towards her honeymoon when the song came over the car’s radio, prompting her to sing the words ‘stand back’ before forcing her husband to pull over in search of a tape recorder.

“All of a sudden, out of nowhere, I’m singing along, going, ‘Stand back!’” Nicks recalled. “I’m like, ’Kim, pull over! We need to buy a tape recorder because I need to record this.’ And so we do – we careen off the freeway to find a radio, record shop or something, and we go in and we buy a little tape recorder.”

Tape recorder in their possession, Stevie and Kim spent the rest of the night in their California hotel room piecing together what would soon become “Stand Back” – complete with the instrumental melody Prince used for “Little Red Corvette”. It wasn’t until Stevie returned to work after her honeymoon that “Stand Back” took shape as a full track, laying down a proper studio recording at Sunset Sound Recorders; it was also at this moment that she decided to call Prince to personally let him know how he’d inspired her.

What happened next is something that only happens in movies or dreams.

Hoping against hope and knowing that the odds were fully against her, Stevie invited Prince down to the studio that day, saying, “I know that 50 percent of it is yours – and, what are you doing later? Because we’re here at Sunset Sound. Do you have any interest in coming down and hearing it?” only to be thrown for a loop when Prince let a beat pass before replying, “‘Yeah, I’ll be right down.”

True to his word, Prince showed up a short time later. Stevie watched in disbelief as Prince laid down a keyboard track for “Stand Back,” a process that took him about an hour to complete before being given “a little ‘I don’t really know you’ hug” and vanishing into the night –  “Like a little spirit.”

It’s been well over 35 years since Prince made his way into the studio and onto Stevie’s track, and while much has changed since then, her feelings on that night haven’t.

“That was the coolest thing we’ve ever heard.”