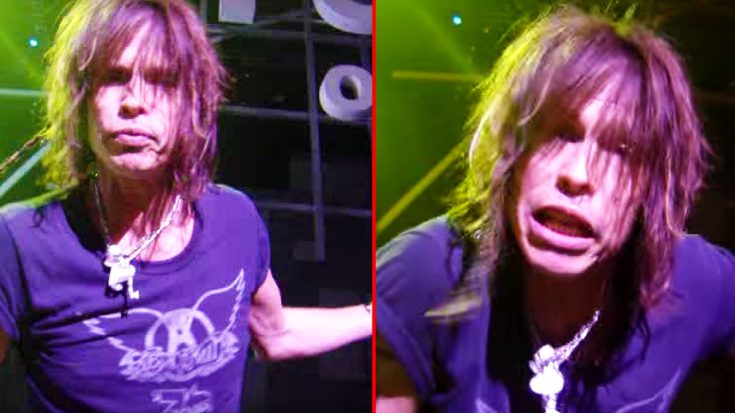 Don’t Mess Around At Steven’s Show!

Steven Tyler is usually a pretty chill person. He is always looking out for his fans, gives them love and never hesitates to stop for an autograph or picture! But if you break a rule, or are being disruptive at his show, he won’t hesitate to call you out. In this video, Steven and Aerosmith are performing a private concert. At private concerts,  you aren’t really allowed to film the band, or take pictures. Well, Steven caught one fan with a camera up the entire time, and promptly called him out mid-song!

As you can see in the video, Tyler pulls away from the microphone, looks directly into the cameraman’s camera and prompts him to stop filming. Through lip-reading, we have determined he says one of two things: Either ” Will you shut the hell up!?,” or “Would you shut that thing off!?”

Knowing that it was a private show, Tyler wasn’t to kind to the fact that someone was filming during it. However, he brushed it off kind of quickly, went back to performing and never told the cameraman (who kept filming, by the way) to turn it off again. So either Tyler felt it wasn’t that big of a deal, or the person who was filming just didn’t comply. Either way, it serves for an interesting moment that you have to check out for yourself!

Watch the video down below, and let us know what you think he said!