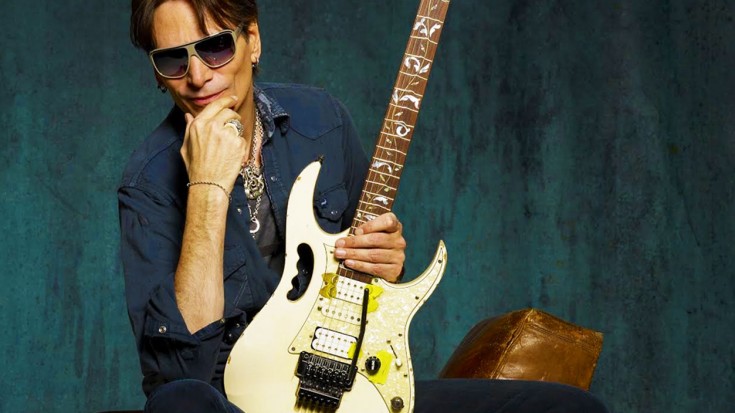 Two decades after rock legend Steve Vai released 1990’s groundbreaking Passion And Warfare, the master guitarist and composer is proud to release Passion And Warfare 25th Anniversary Edition – a celebration of one of the greatest and most influential rock guitar albums ever recorded, remastered from original analog tapes and featuring 4 bonus tracks from the album’s recording sessions.

In addition to a special 25th anniversary world tour where fans can hear Vai perform Passion And Warfare in its entirety for the first time ever, this momentous occasion is made even more special by the release of Vai’s Modern Primitive – his highly anticipated ‘lost’ album featuring a collection of previously unreleased tracks written following the release of 1984’s Flex-Able including our personal favorite, the newly released “Dark Matter”.

A raw, heavy track, “Dark Matter” is a celebration of Vai’s signature sound and seamlessly blends distorted, spicy melodies with an infectious groove that makes it both impossible to sit still and listeners marvel yet again at Vai’s genius as a guitarist and composer.

Slated for a June 24th release, Modern Primitive / Passion And Warfare 25th Anniversary Edition is being released as a 2CD physical collection while each disc will be available as a separate title on all digital platforms and is currently available for pre-order here, so be sure to reserve your copies now so that you too can fall in love with Modern Primitive’s previously unheard tracks like “Dark Matter” and “Never Forever” while revisiting the magic of Passion And Warfare!

Steve Vai’s Modern Primitive / Passion And Warfare 25th Anniversary Edition is due out June 24th on CD, Mp3 format and vinyl and is currently available for pre-order. Buy it here on Amazon!