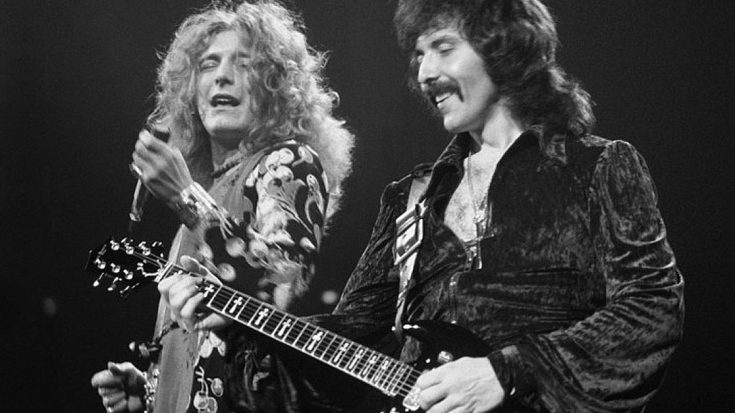 Is It Black Zeppelin, or Led Sabbath?

If two bands form a supergroup and record a jam session together, but there’s no actual tape of said jam session, was there ever really a jam session to begin with? Rock fans were faced with this “if a tree falls in the woods” scenario when it was revealed that in 1975, Black Sabbath and Led Zeppelin converged on Morgan Studios in London during Black Sabbath’s Sabotage sessions and turned a friendly visit from 3/4 of Led Zeppelin into a jam session that Ozzy Osbourne says made it onto tape but was ultimately lost to time.

Both bands have enjoyed a lengthy friendship (so lengthy that Ozzy recently texted Robert Plant to inquire as to the whereabouts of his lost cat) that dates back to before Plant even joined Led Zeppelin, so it’s not a surprise that these old friends got together for a jam session; what is a surprise, however, is the fact that there’s no actual evidence of two of the most influential rock bands of the 20th century coming together.

“They came in and John’s going, ‘Let’s play Supernaut!’, cos he loved that song. So he sat behind the kit and we started to play it. Of course, he didn’t play it right, but we just carried on and went into a jam,” reveals Tony Iommi.

“We were just jamming, making stuff up. Our session went totally out of the window. The tapes are probably somewhere, but I don’t know where. And it ruined our session anyway.”

Honestly…even a ruined Black Sabbath session featuring Robert Plant, John Paul Jones and John Bonham would be the greatest thing in the world. As Iommi says the tapes are pretty much lost at this point in time, but here’s hoping that the tapes are one day found and released; Black Sabbath and the surviving members of Led Zeppelin sadly won’t be around forever, and one day the memories of this legendary jam session will be lost forever, marking yet another rock and roll tragedy.