SRV Rocks The Montreux Jazz Festival With “Hide Away” 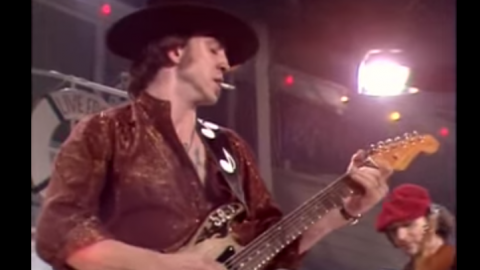 One Of His Greatest Moments

This is Stevie Ray Vaughan’s cover of “Hide Away” which was originally recorded by Freddie King. According to Wikipedia, “”Hide Away” or “Hideaway” is a blues guitar instrumental that has become “a standard for countless blues and rock musicians performing today.””

Along with Double Trouble, he performed this piece during the Montreux Jazz Festival in July 1982. He opened the medley with “Hide Away” and followed it with “Rude Mood”. Also, the studio version has been included in the 1999 remaster of his 1984 album “Couldn’t Stand the Weather.”

“It’s difficult to emulate SRV’s tone because his hands and soul had so much to do with it. Having said that, in my opinion, if there’s a player whose sound you really admire, you might be able to emulate his tone by investigating the gear he used.” – Kirk Hammett

Also, can we just say how cool he looks? Seriously, he’s so chill as if he’s not shredding it like a total beast.