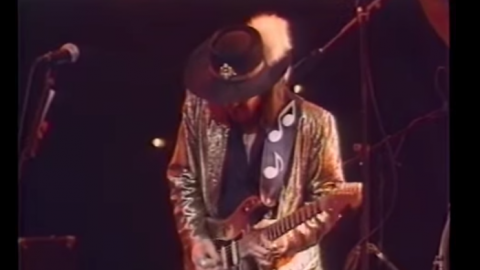 “Wham!” is a live instrumental which was also included in Steven Ray Vaughan’s remastered album and his fifth studio album entitled, “The Sky Is Crying.” This track originally came from SRV’s appearance in the 1989 “Austin City Limits.” As with his other chart-topping hits, he showcases his extreme versatility by trying on different genres and shredding with so much power and passion that it often leaves the audience breathless and in awe.

“I got a lot of the fast things I do from Lonnie.” – Stevie Ray Vaughan

Stevie Ray Vaughan rips it in his incredible solo performance as shown in this particular video. This was at The Orpheum Theater on Beale Street, Memphis which happened during August of 1986. For the record, this is one of the best jams we’ve ever seen. There’s an overflowing amount of talent on that stage.

They are both legendary guitar players, no doubt about that.