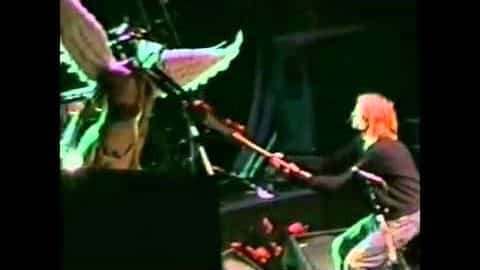 Although Kurt Cobain wasn’t the type of musician who’d be treating instruments nicely during shows, one of the guitars he smashed onstage is up for sale. Fans are given the opportunity to bid on and own one.

This coming November 11 and 12, an event called Icons & Idols: Rock ‘N’ Roll will be taking place. The Julien’s Auctions organized event will be happening at the Hard Rock Cafe in New York and will also be available online.

There, pieces owned by music legends such as Cobain, Eddie Van Halen, Gene Simmons, Guns N’ Roses, AC/DC, Nikki Sixx, and others will be up for sale. The Cobain-owned guitar that will be part of the auction is a 1973 Fender Mustang. The Nirvana singer played and destroyed it onstage during two shows in 1989.

For the record, these two shows were part of their very first U.S. tour. During that time, Cobain traded the guitar for a smashed Gibson SG owned by Sluggo Cawley of the band Hullabaloo. In the Mustang he wrote:

“Yo Sluggo / Thank for the trade / If its illegal to Rock and Roll, then throw my ass in jail / Nirvana.”

Even if the event hasn’t officially started, the guitar has four bids already, with the current bid being $200,000. Aside from that, other Nirvana-related items will be included in the auction as well, including signed albums and articles of clothing, and even all-access passes.