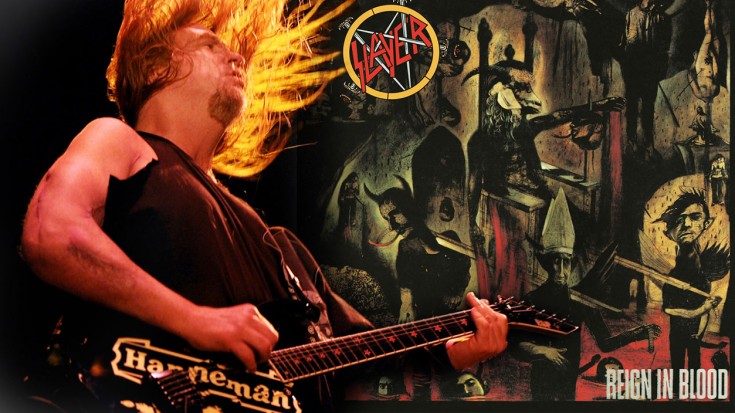 The crown jewel of Slayer’s 1986 release Reign In Blood was definitely ‘Raining Blood’; running at nearly 5 minutes long, the thrash classic closed out the album on a particularly blistering note. ‘Raining Blood’ was written primarily by the late Jeff Hanneman and Kerry King, and describes “a banished soul awakened and hungry for vengeance”, ultimately leading to the overthrow of Heaven. It’s one of Slayer’s most iconic songs, and one that even the band loves – Jeff Hanneman recalled it being one of the band’s favorite to perform live!

This song is absolutely vicious from start to finish, and there’s a reason why ‘Raining Blood’ has stood the test of time; between Rick Rubin’s brilliant approach to production that gives the song a distinct sense of dread and foreboding and the band’s incredible precision, ‘Raining Blood’ hits you like a punch to the gut each and every time. That’s why we keep going back to it, even after all these years!

Trapped in purgatory
A lifeless object, alive
Awaiting reprisal
Death will be their acquisition

The sky is turning red
Return to power draws near
Fall into me, the sky’s crimson tears
Abolish the rules made of stone

Pierced from below, souls of my treacherous past
Betrayed by many, now ornaments dripping above

Awaiting the hour of reprisal
Your time slips away

Raining blood
From a lacerated sky
Bleeding its horror
Creating my structure
Now I shall reign in blood!