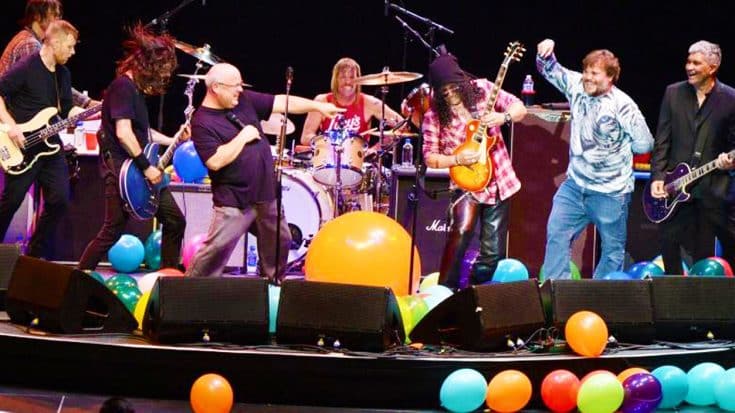 The mount Olympus of jam sessions

In the modern day rock world, there might not be a bigger fan of the classics than Foo Fighters frontman Dave Grohl. Grohl has always been involved in the scene, and takes almost any opportunity he can get to team up with these artists!

While performing at The Forum in Los Angeles, Dave called up Guns N’ Roses guitarist Slash onto the stage to join the Foo’s for a few songs! In addition to Slash, dave also brought up fellow classic rock enthusiast, actor and singer Jack Black, and the group of friends performed an epic cover of Led Zeppelin’s “The Immigrant Song.” Jack takes on the role of the vocals, and crushes a flawless impression of the great Robert Plant’s voice, while Slash and the Foo’s perfectly emulate the great instrumentation of Jimmy Page, John Bonham and John Paul Jones.

The whole performance looks like one big party, and will make every rock n’ roll fan crack a smile. It’s beautiful to see musicians honor the classics, and pay tribute to the amazing artists that inspired them!

Check out the epic video down below, and let us know what you think!