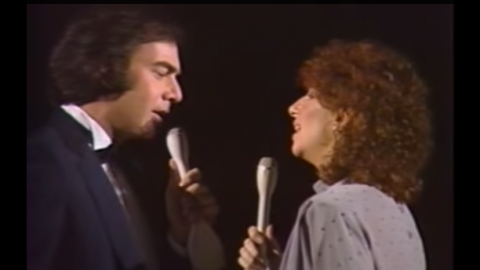 You gotta listen to Neil Diamond and Barbra Streisand perform “You Don’t Bring Me Flowers”! Incredible. Probably two of the most iconic singers of that time, they come together and perform an amazing duet. And what can we say? It hits us right in the feels. It has an interesting story too and well, we can’t deny the fact that Neil and Barbra were the perfect pair for this. They sound so amazing.

“This song was actually written for a television show that was to be produced by Norman Lear, All That Glitters. The premise of the show was that the roles of men and women were juxtaposed: the men stayed home with the babies and did the housework, and the women went out to work.” – Neil Diamond to Mojo Magazine

It’s one of the most beautiful songs Neil Diamond has ever recorded. Decades after it was released, it feels like this performance happened only yesterday.