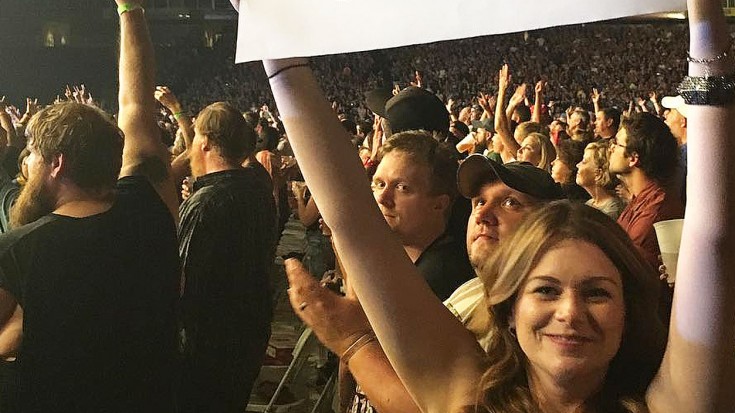 The absence of Izzy Stradlin from Guns N’ Roses’ hotly anticipated Not In This Lifetime Tour is the proverbial pink elephant in the room; impossible to miss and even harder to avoid talking about. One brave fan dared to ask Guns N’ Roses the age old question of “Where’s Izzy?” at last week’s concert in Nashville that featured the second ever appearance by former drummer Steven Adler and was surprised to see that her sign was well received by her seatmates and people nearby – even Axl Rose laughed when he saw it in the audience – but the real shock came when moments later, her “Where’s Izzy?” sign was destroyed by a security guard who claimed to be speaking on behalf of the band.

The fan, identified as Caroline Campos, later wrote on Facebook: “Axl looked at my sign and started laughing and said ‘That’s a good question!’ He seemed to appreciate the sign.”

She continued, “A guy in jeans and a black shirt tapped my shoulder and said ‘Is that your sign? You need to give it to me.’ I said ‘Why? Who are you?’ He showed a badge and said ‘I’m with the band and they’ve asked for the sign to be removed.’ I gave it to him and he walked away folding and ripping it up.”

To make things even more confusing, a representative for Guns N’ Roses spoke out this morning and denied all allegations that the band wanted the sign destroyed, saying “GN’R would never make this request! Izzy is family!”

Wow. Axl Rose of 2 decades ago might have gotten upset over such a sign, but all signs point to the 54-year-old singer having turned a major corner in his personal evolution, making us believe that maybe the order to destroy Caroline’s sign didn’t actually come from the band itself, but from a security guard who thought he was doing them a favor. Either way, we hope that Caroline had a great time at the show and that once the details come out, she receives a sincere apology.