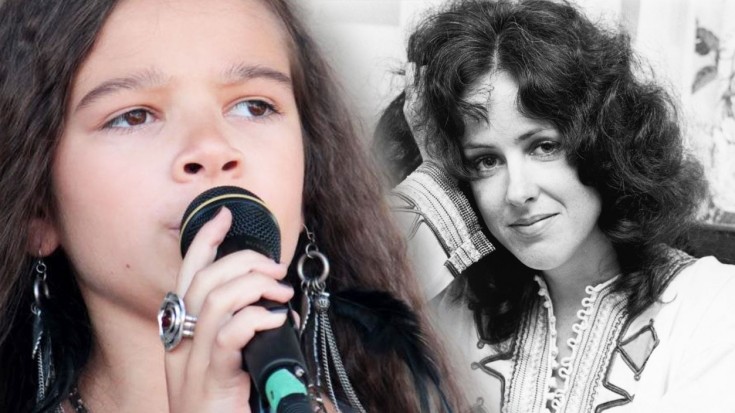 At 12 years old, Sara Menoudakis of Canadian rock band Motion Device blew us away when she channeled psychedelic siren Grace Slick for this cover of Jefferson Airplane’s ‘White Rabbit’. Absolutely fearless, this force to be reckoned with took on the classic and nailed it – from her white flowy outfit that reminds us of the fringed jumpsuit Grace wore during Jefferson Airplane’s set at Woodstock to that powerhouse voice, Sara is the picture of all things ‘White Rabbit’!

Slick got the idea for this after taking LSD and spending hours listening to the Miles Davis album Sketches Of Spain.

Sara’s old soul reminds her band Motion Device’s fans of a very young Grace Slick, mixed with a little Janis Joplin. Together with her band, Sara has taken on some of the most challenging vocals in rock music, never shying away from a challenge! From Janis Joplin’s ‘Turtle Blues’ to Ozzy’s ‘Crazy Train’, this girl has proven to be absolutely unstoppable in her vocal abilities and unshakeable in her pursuit of greatness!

And if you go chasing rabbits, and you know you’re going to fall
Tell ’em a hookah-smoking caterpillar has given you the call

And call Alice, when she was just small

When the men on the chessboard get up and tell you where to go
And you’ve just had some kind of mushroom, and your mind is moving low

When logic and proportion have fallen sloppy dead
And the white knight is talking backwards
And the red queen’s off with her head
Remember what the dormouse said
Feed your head, feed your head