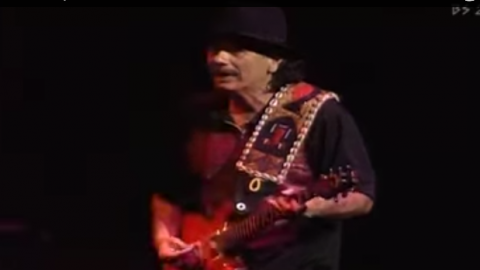 “Incident At Neshabur” is an instrumental track from the second studio album of Santana entitled, “Abraxas” which was released on September 1970. It was also included in Lotus (released on 1974) and Viva Santana! which is a compilation album released on 1988. This track was written by Carlos Santana himself and Alberto Gianquinto.

“Neshabur is where the army of Toussaint Louverture – who was a black revolutionary – defeated Napoleon in Haiti. So that’s what it’s about. I think by writing songs like ‘Incident at Neshabur’ and ‘Toussaint L’Overture,’ we felt we were our own kind of revolutionary […] Alberto Gianquinto, our pianist on Abraxas, helped us a lot putting it together. The first part of the music is from Horace Silver’s ‘Señor Blues.’ The slow part is […] from Aretha Franklin’s ‘This Girl’s In This Love With You.'” – Santana

In this particular piece, Carlos Santana showcases versatility with the varying rhythm coupled with a touch of jazz. This “Abraxas” album also ranked in the 205th place of Rolling Stone’s “500 Greatest Albums of All Time.”