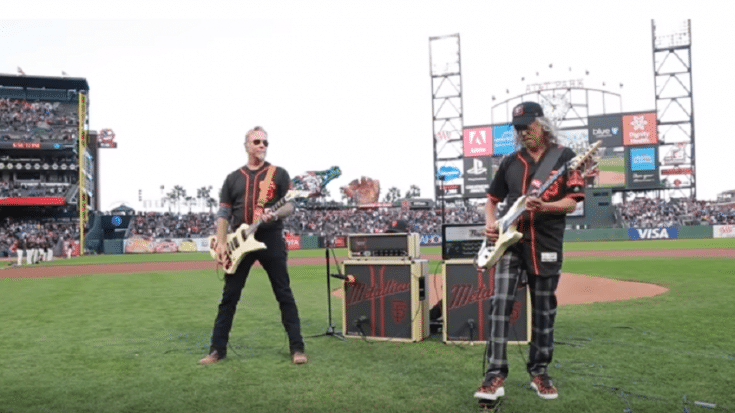 They’re On Their 7th Year!

On April 26, the San Francisco Giants will host the 7th Annual Metallica Night. Metallica will take over Oracle Park, formerly AT&T Park, where the Giants will go up against the New York Yankees. The Giants’ wrote in their official website:

“Honoring the Grammy-Award winning band that has been entertaining fans worldwide since the 1980s, Metallica Night is back at Oracle Park for its 7th season! Make sure to arrive early, as members of the band will be on-hand participating in various pre-game festivities! Your Special Event ticket package includes a ticket to the Friday night game against the Yankees, as well as an exclusive Giants/Metallica Beanie, only available with purchase of this Special Event ticket package! You are invited to bring out your friends, family, and music lovers of all ages, as Metallica entertainment will be featured throughout the game!”

Part of the proceeds will go to Metallica’s All Within My Hands foundation which is “dedicated to creating sustainable communities by supporting workforce education, the fight against hunger, and other critical local services.” In a statement by Metallica, they announced:

“Members of the band will be on hand to start things off with the National Anthem and first pitch, sticking around all night to cheer on the team against the New York Yankees. As is customary, we’ll take part in some of the between-inning fun and games, as well as an exclusive pre-game VIP event (more on that below).”

There will also be A VIP Experience in Triples Alley where Lars Ulrich and Robert Trujillo will stop by for some Q & A with the fans. Some of the other perks of the VIP ticket package include lower box ticket to the game, complimentary food and beverage, on-field warning track access, Triples Alley VIP party space access, and a limited edition Giants/Metallica Replica Guitar in addition to the beanie.

“We’re blessed to be doing this every year and being a part of the vibe here. You know, when times are good, when times are bad, they need the support.” – James Hetfield

What are you waiting for? Purchase the tickets here.