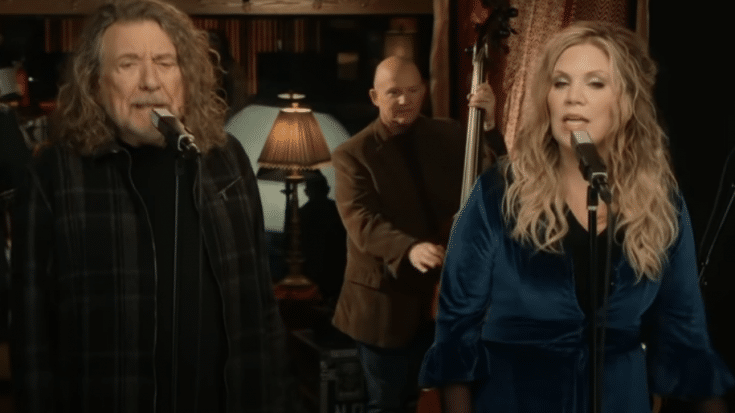 With their tour that keeps on extending, Robert Plant and Alison Krauss have been spending a lot of time on the road now. And recently, the former Led Zeppelin frontman has owned up to teasing Krauss in a mischievous way.

The duo are now touring in support of their most recent album, Raise the Roof that was released on November 19 last year, which debuted at No. 7 on the US Billboard 200. It’s their first LP together since their 2007 collaboration, Raising Sand, that earned five Grammy Awards, including Album of the Year.

Their second collaborative album also features their classic folk and Americana sound. In a new interview with Rolling Stone, Plant shared how he teases Krauss by playing around with his vocals while they perform live. He said:

“I’m still slightly impish, so I might hold one syllable of a word a little bit long, and she hangs on with me, and she doesn’t know when it’s going to end, that particular syllable.”

Krauss said in a previous interview that they work well together because her “regimented” approach was a contrast to his “freedom and spontaneity.” Plant continued that when he pull the trick, their “eyebrows tell everything.”

“She’s asking me, ‘Why am I doing this? Why are you fucking about like this?’

“It’s great. … I have this license where I can actually get away with it, and I’m singing alongside a monster singer who has great demands of how my harmony fits under the songs that she selected.”

He then recalled his past performances with Led Zeppelin in the ‘70s when he felt the “panic of responsibility.” He explained:

“There was nowhere to hide at all.

“There were great days and there were days that weren’t so good, and I would have to push through. A lot of what I was singing was really at the top of my capacity, right at the sharp end of what I could ever possibly do.”

But Plant noted that things have changed since then, saying:

“From then on, I made a lot of departures, and I have no embarrassment about them.

“They were all rather silly adventures, but they kept me thinking, or just falling upon melody.”

Plant, 74, stated that despite his age:

“I can still do all the shit that I could do before, because occasionally through these shows I let it rip for a minute, and I know very well that that’s as much as we need to do of that.”

Plant and Krauss will continue their current trek through September.