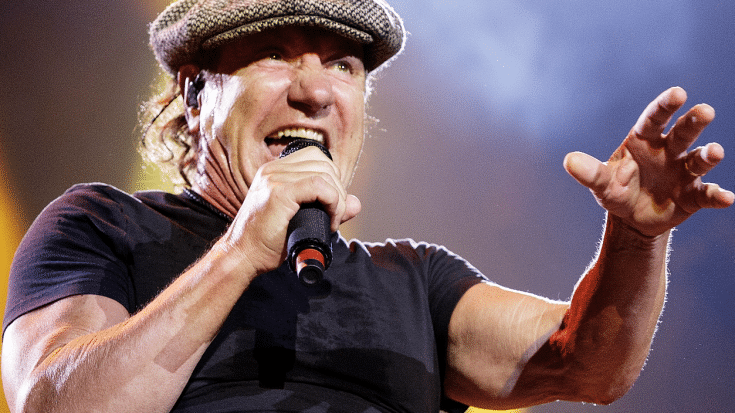 Those were the options Brian Johnson faced ahead of AC/DC’s Rock Or Bust Tour in early 2016, his failing hearing becoming less of an annoyance and more of a threat to both his career and quality of life by the day. Ultimately, Johnson chose the former – he stepped down, his 36 year run as the leader of the world’s loudest rock band brought to an end not with a bang but with a whimper, hardly a sendoff fitting for one of rock’s most beloved frontmen.

Now, three years later, it looks like Brian is ready to make up for lost time as he allegedly makes his long awaited return to AC/DC.

But first, let’s back up.

Last year, speculation ran rampant that AC/DC were back in the studio working on a new album with Brian Johnson back at the helm. Not long after, he and drummer Phil Rudd were spotted in Vancouver at the band’s recording studio, further fueling rumors that AC/DC had something cooking:

Now, it looks like there may be some truth to the rumors after all, thanks to American grindcore band Terrorizer. While heading home from their European tour, Terrorizer reportedly ran into Johnson at the airport and asked about the rumors surrounding AC/DC and a possible new album in the works, to which Johnson allegedly replied ‘Yes’ and that he is ‘sick of denying it.’

The band included this interesting little exchange in a rundown of their tour, posted to Facebook:

Last night we played the final show of the TERRORIZER – "Caustic Attack Over Europe" Tour 2019. The last week we have…

Posted by Terrorizer on Monday, 28 January 2019

“We ran into Brian Johnson from ACDC at the airport today after the flight home and we asked him about the rumors of him being on the new ACDC album and he said “Yes” and that he is ‘sick of denying it’. So that was a cool surprise ending to the tour,” wrote Terrorizer.

It’s important to stress that neither AC/DC or Brian Johnson have confirmed the news of his alleged return to the band.

If – and that’s a big if – what Terrorizer said is true, then Brian’s return to AC/DC comes with a whole host of questions: is his return permanent? What’s up with his hearing? Is he able to tour in support of the album or is this the beginning of AC/DC’s life as a strictly recording, non-touring entity? What does his return mean for AC/DC’s future as a whole?

In the end, only time will tell. With rumors swirling around more than ever, it’s only a matter of time before Brian or AC/DC come out to either confirm or deny the news – but we’d be lying if we said we weren’t really, really hoping that it’s true.

This is a developing story; stay tuned to Society of Rock for more updates as they become available!