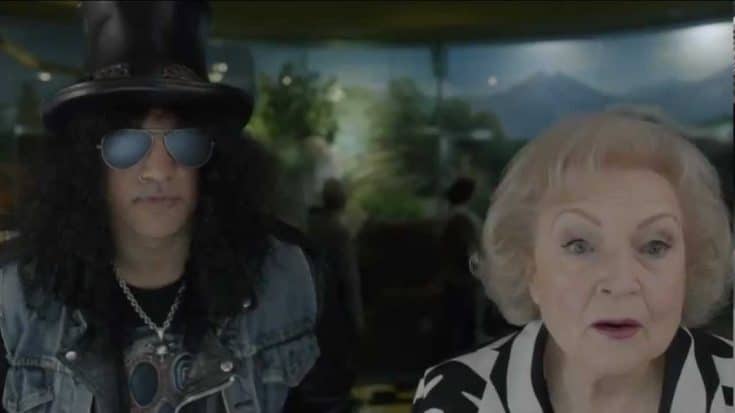 Who would have thought that the pair of Slash and Betty White can be seen together in a zoo commercial? Not many were aware that the late actress who just recently passed away at the age of 99 made a commercial with the iconic guitarist in the year 2012.

The commercial was a promotion for the opening of the Los Angeles Zoo’s newest exhibit called the LAIR which stands for Living Amphibians, Invertebrates, and Reptiles. And you’re probably wondering ‘why these two’? It’s because Slash and White are both trustees of the non-profit, private Greater Los Angeles Zoo Association (GLAZA).

Back in 2012, Slash told Samaritanmag,

“I used to not believe in zoos as a concept, but now because there are so many endangered animals; there’s so much poaching,”

The Golden Girls star was also a pioneering animal rights advocate who dedicating much of her life to improving conditions at the Los Angeles Zoo. GLAZA President Tom Jacobson commented on White’s dedication to animals, saying,

“Her work with [the zoo] spans more than five decades, and we are grateful for her enduring friendship, lifelong advocacy for animals, and tireless dedication to supporting our mission.”