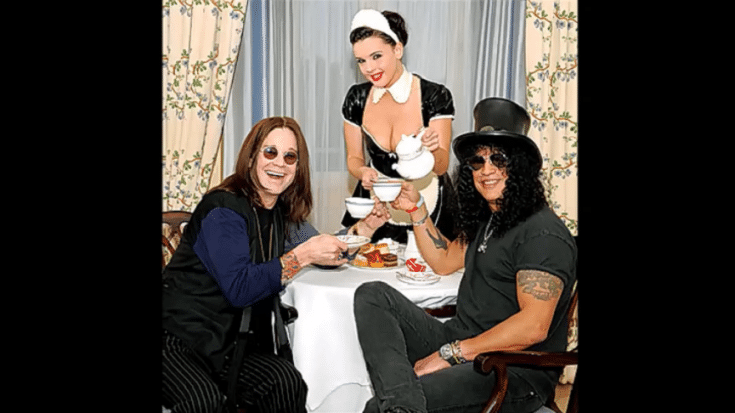 While some fans were shocked at Ozzy Osbourne’s recent collaboration with rapper Post Malone, he’s actually no stranger to unlikely musical pairings. Aside from churning out classics during his time with Black Sabbath and as a solo artist, the Prince of Darkness also doesn’t mind appearing on another musician’s work as their guest. As a tribute to the “Godfather of Heavy Metal” who’s about to drop his latest album next year, here are ten of his most unforgettable duets.

Lita Ford and Ozzy wrote it together after drinking heavily in the studio. Ford used to be engaged to Ozzy’s bandmate Tony Iommi and was also managed by Ozzy’s wife Sharon. Ford told Metal Underground: “Close My Eyes Forever was a mistake. It was just me and Ozzy and Sharon hanging about in the recording studio. They showed up one day and had a housewarming present for me: a life-size duplicate of Koko the gorilla from the San Diego Zoo. It was freaking huge – I had to strap it in the front seat of my jeep to get it home. Ozzy stayed, Sharon got bored and left, and me and Ozzy had a couple of drinks and we were jamming. We started singing, messing about and we wrote ‘Close My Eyes Forever.'”

Alice Cooper enlisted the help of his friends for this 1991 single. Ozzy Osbourne, Slash, and Joe Satriani all appeared on the song with Ozzy providing backing vocals.

Even Ozzy himself agrees this was a ridiculous collaboration saying, “Sometimes [collaborations] work out okay, but I only do these things for a goof. I mean, believe me, I’m not a big Miss F–king Piggy fan! You know, you gotta be careful about what you do.” It’s still pretty enjoyable though.

Although this duet may have come as a surprise to most people, Ozzy and YES keyboardist Rick Wakeman go way back. He played on “Sabbra Cadabra” from Black Sabbath’s “Sabbath Bloody Sabbath” album. He also revealed in 2016 that Tony Iommi wanted him to join the band. YES even supported them in the ’70s. He told Prog Magazine, “Socially, Sabbath were much more my cup of tea than Yes were – drinkers and hell-raisers who really loved their rock ‘n’ roll. I used to travel with Sabbath on their plane because we got on so well. In fact Tony Iommi, who I have remained great friends with over the years, once told me the band were seriously considering asking me to join them at one point, because we got on so well and they were looking to expand their sound. But Ozzy was worried, probably quite rightly, about how the metal fans would react.”

Ozzy Osbourne sang on the title track of Ringo Starr’s 1998 album. According to Starr, “We had this open-door policy, whereby if you dropped by while we were recording, you were going to get asked to be on the record.”

Ozzy was featured on Slash’s debut solo album. Slash admitted he’s been listening to Ozzy’s music since he was young. He told Music Radar: “Ozzy was a lot of fun. It was a real honor – he’s so busy with his stuff – and he took the time to stop and really focus on writing the lyrics for this song. We recorded the vocals up at Ozzy’s house, and it was funny because I’m sitting here and Ozzy’s here and we’re sitting at the control board and he’s got his microphone, and he’s working on the lyrics and he’s singing them, trying to work out how they should go. It’s such a recognizable voice! It was just a trip to hear Ozzy working out the parts for a piece of music that I wrote. Somebody I’d been listening to since I was a kid, all of a sudden right there. He put together a very poignant set of lyrics about a particular subject matter that a lot of us can relate to.”

Ozzy sang on a track from Rob Zombie’s second solo studio album The Sinister Urge. Initially though, Zombie didn’t think about featuring Ozzy. He said, “I thought that somehow the song didn’t seem special enough. Somehow I thought that the song wasn’t as good as it should be and I had been talking to Ozzy a lot and working on stuff for the tour and someone was like, ‘Why don’t you just get Ozzy to fucking do it?’ It was like, duh. Sometimes you don’ think of the obvious ideas.”

Ozzy had worked with Gary Moore before he got Randy Rhoads on board. Moore, however, was apprehensive about joining Ozzy’s band but he did offer to help Ozzy find a guitarist. About the song, Ozzy recalled: “That song was great fun and it was an honour to record with Gary.”

Ozzy provided background vocals for the song. He and Zakk Wylde have worked together for years and also collaborated several times. And they have nothing but praises for each other. Ozzy told Guitar World, “Here’s the thing with me and Zakk: We never fell out. That’s the truth—we’re close. The Wylde family and the Osbourne family are like relatives. I’m a godfather to his son Jesse. Our wives go shopping together. This goes beyond friendship. I know that I can be anywhere in the world at any time, and if my guitar player disappears, I can phone Zakk and he’ll be on the next plane.”

It’s not a song you’d expect to hear from Motörhead or Ozzy Osbourne. Nevertheless, it’s a beautiful piece of music. Lemmy Kilmister also co-wrote some songs for Ozzy’s 1991 album No More Tears. Lemmy said, “That was one of the easiest gigs I ever had – Sharon rang me up and said, ‘I’ll give you X amount of money to write some songs for Ozzy’, and I said, ‘All right – you got a pen?’ I wrote six or seven sets of words, and he ended up using four of them… I made more money out of writing those four songs than I made out of fifteen years of Motörhead – ludicrous, isn’t it?!”