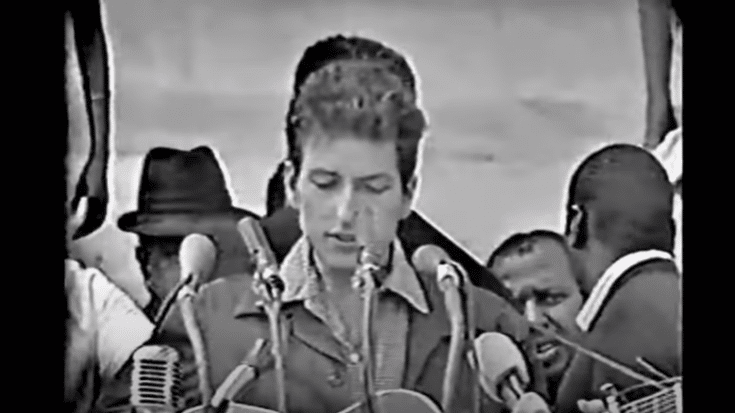 On August 28, 1963, the Martin Luther King Jr.’s March was held at the National Mall in Washington, DC. Although it’s often remembered for King’s “I Have a Dream” speech, there were also performances from artists who sang their protest songs. Mahalia Jackson, Marian Anderson, Joan Baez, Peter, Paul and Mary, and Bob Dylan all performed from the podium prior to the main event.

In the video below, 22-year old Dylan played “Only a Pawn in Their Game.” Other songs on his set that day also included “When the Ship Comes In,” “Blowin’ in the Wind,” and “Keep Your Eyes on the Prize.”

In the 2005 Martin Scorsese documentary No Direction Home, Dylan recalled: “I looked up from the podium and I thought to myself, ‘I’ve never seen such a large crowd.’ I was up close when King was giving that speech. To this day, it still affects me in a profound way.”

“Only a Pawn in Their Game” was Dylan’s tribute to civil rights activist Medgar Evers who was assassinated by a member of the White Citizens’ Council in 1963. Dylan debuted the song in public on July 6, 1963 at a voter registration rally in Greenwood, Mississippi. It was a month later when he recorded it for his album “The Times They Are a-Changin’.”