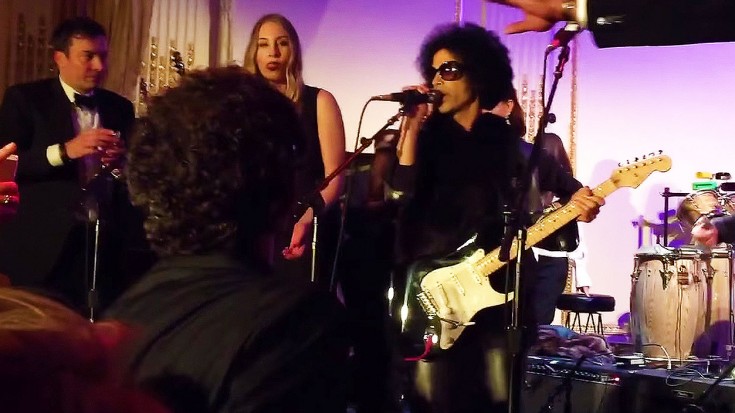 One of the best jam sessions of all time

One memorable, rare piece of Prince is him jamming at SNL’s 40th Anniversary show after-party. Talk show host Jimmy Fallon (who MC’d the after-party) recalled that the party had a stage with a ton of musical instruments set up for anybody to play. Fallon said that over the course of the night, stars like Paul McCartney, The B52’s and Elvis Castello, among others, got on stage and played.

Toward the end of the night at about 4:30 am, Fallon heard Prince was present and called him out to come up to the stage and perform. He recalled that the crowd parted, Prince got up and did an impromptu jam of “Let’s Go Crazy” and absolutley shredded. In the video, you can see stars like Chris Rock, Martin Short and Emma Stone join in and sing background for Prince.

This has to go down as one of the greatest videos of Prince, and proves why he was one of the most overlooked guitarists ever. The fact he was able to get on stage without any prior rehearsal, or his personal guitar and jam out a ridiculous rendition of one of his classics is pure talent. He will truly be missed, but at least we have footage of him like this to cherish forever.

Enjoy the greatness down below!