Queen Makes The Rockin’ World Go ‘Round With “Fat Bottomed Girls,” Live In ’79 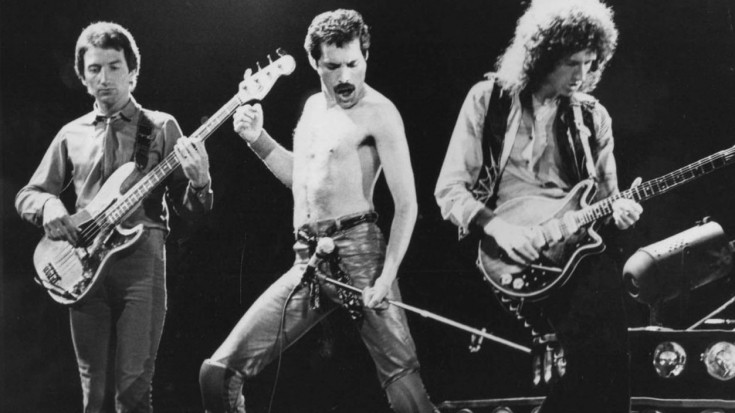 It’s impossible to imagine one person possessing this much energy and still being able to deliver the kind of vocal performance we’re used to hearing, but then again, Queen’s Freddie Mercury was always unmatched when it came to showmanship – and this 1979 performance of “Fat Bottomed Girls” is proof! Taken from the band’s Paris stop on their 1979 Jazz Tour, this footage features an all star performance by Queen and more specifically Freddie Mercury, who after kicking things off with a cheeky little introduction celebrating the assets of more well endowed women, launches into the song with a wildly impressive opening note that meshes seamlessly with the harmonies provided by Roger Taylor and Brian May.

Sporting a pair of leather pants and bright red suspenders, it’s clear that Freddie is the star of the show as he takes center stage to sing this song about a young man who appreciates women with substantial girth. Fitting, then, considering Queen drummer Roger Taylor later said, “I wrote it with Fred in mind, as you do especially if you’ve got a great singer who likes fat bottomed girls… or boys.”

Fun Fact: Written in 1978 and featured on Queen’s seventh studio album Jazz, “Fat Bottomed Girls” was performed live for a brief few years – 1978 to 1982 to be exact.

Nothing makes us miss Freddie Mercury more than footage of vintage Queen performing the songs that have kept us dancing for over 40 years. Gone are the days when bands and artists truly rocked their audiences with high energy, fun performances such as this, and with them the performers who set the standard for what entertaining really is. Revisit those days with this footage of Queen, live in Paris and remember how they made the rockin’ world go round!