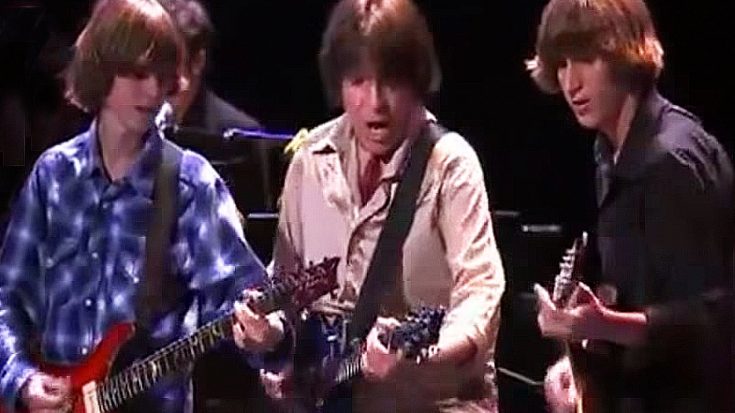 A New Generation Of Fogerty Brothers

“Take Your Children To Work Day” got a brand new meaning when Creedence Clearwater Revival founder John Fogerty enlisted the help of his teenaged sons Shane and Tyler for a high octane spin on 1970’s “Up Around The Bend”. Featuring the three Fogerty men at the center of the stage engaging in a triple guitar attack that would make the guys in Lynyrd Skynyrd smile, “Up Around The Bend” has a brand new energy we’ve never heard before and with the addition of Shane and Tyler Fogerty trading licks on lead guitar, the fast pace and bright sound definitely make sense.

Fun Fact: For his songwriting achievements, Fogerty was honored as a BMI Icon at the 58th annual BMI Pop Awards on May 18, 2010.

At 71, John’s showing no signs of slowing down any time soon but as with any family musical dynasty, there does come a time when the torch needs to get ready to be passed on to the next generation and knowing John’s fierce attention to detail and passion for his craft, his sons have spent more than their fair share of time taking in their dad’s decades of experience as a rock legend. The way that Shane and Tyler manage to not just keep up with John but find a moment or two to shine is nothing short of impressive and we’re forced to believe that in a few years, we’ll be hearing from a new generation of Fogerty brothers as they step out on their own to forge their own musical legacy.