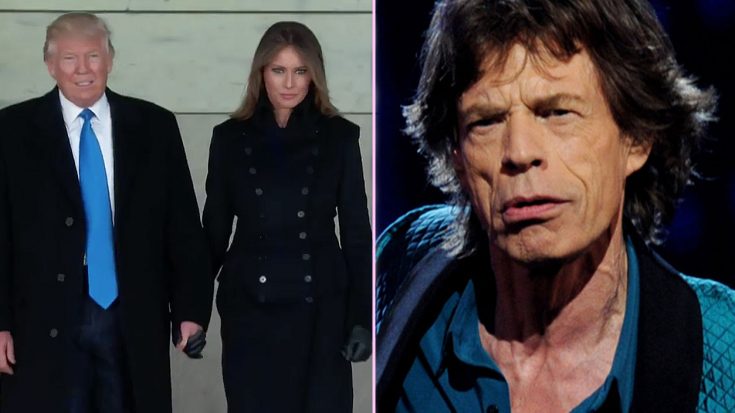 Well, the excitement is over. Donald Trump is officially President Donald Trump after his swearing-in ceremony yesterday, but before the weekend’s festivities could begin President Trump kicked things off with Thursday night’s inauguration concert at the Lincoln Memorial, raising a few eyebrows when he and First Lady Melania Trump took the stage to The Rolling Stones’ “Heart Of Stone”.

Not a big deal, unless you consider the fact that The Rolling Stones raised a bit of a fuss last year over Trump’s use of their songs despite being asked several times to refrain from doing so after “You Can’t Always Get What You Want” was used both during the campaign as well as to end his acceptance speech following his November 8, 2016 win.

While it may ruffle Mick Jagger’s feathers, he can’t stop President Trump from using Rolling Stones tunes, and here’s why:

“So, the thing is, when you appear in America…if you’re in a public place like Madison Square Garden or a theater, you can play any music you want, and you can’t be stopped,” explains the Rolling Stones frontman.

“So, if you write a song and someone plays it in a restaurant that you go to, you can’t stop them. They can play what they want.

Even so, you won’t see The Rolling Stones giving the use of their songs for political campaigns – from either side –  their seal of approval any time soon. Check out Donald and Melania’s big moment in the video below!

President-elect Trump, Melania Trump walk down the steps of the Lincoln Memorial to the Rolling Stones’ ‘Heart of Stone’ pic.twitter.com/30foTDZgE5