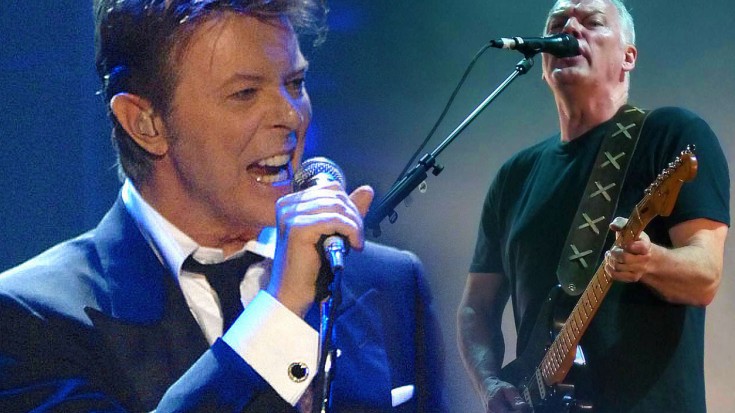 In 2006, Pink Floyd guitarist David Gilmour embarked on a European solo tour that included a veritable who’s who list of guest stars; supported by the likes of David Crosby and Graham Nash and former Pink Floyd bandmates Nick Mason and Rick Wright, Gilmour’s wildly successful On an Island Tour was capped off by an encore performance of “Comfortably Numb” that featured the talents of late legend and friend David Bowie, who made a surprise appearance at Gilmour’s London performance.

Filmed at the Royal Albert Hall, “Comfortably Numb” can only be described as cosmic. Of course, it goes without saying that Gilmour is the star of the show – he did write most of the music, after all – but the extremely dapper Bowie is electric as he delivers a vocal performance that while remarkably close to the original is still unquestionably David Bowie.

Fun Fact: In 2005, “Comfortably Numb” became the last song ever to be performed by all four members of Pink Floyd.

“Comfortably Numb” is visually stunning with a light show reminiscent of everything we’ve come to love about David Gilmour even as far back as the early Pink Floyd shows, but the real magic lies in the gentle push and pull between he and Bowie. Egos left behind, both men are two halves of an incredible song, with Bowie knowing when to stand back and Gilmour when to let him shine. While this would ultimately be one of Bowie’s final live performances (and one of the final as well for late keyboardist Rick Wright), we’re incredibly lucky that this moment between two great musicians and even greater friends was immortalized on film.

Is there anybody in there?
Just nod if you can hear me.
Is there anyone at home?
Come on now
I hear you’re feeling down.
Well I can ease your pain
Get you on your feet again.
Relax.
I’ll need some information first.
Just the basic facts.
Can you show me where it hurts?

There is no pain you are receding
A distant ship smoke on the horizon.
You are only coming through in waves.
Your lips move but I can’t hear what you’re saying.
When I was a child I had a fever
My hands felt just like two balloons.
Now I’ve got that feeling once again
I can’t explain you would not understand
This is not how I am.
I have become comfortably numb.

O.K.
Just a little pinprick.
There’ll be no more, ah!
But you may feel a little sick.
Can you stand up?
I do believe it’s working, good.
That’ll keep you going through the show
Come on it’s time to go.