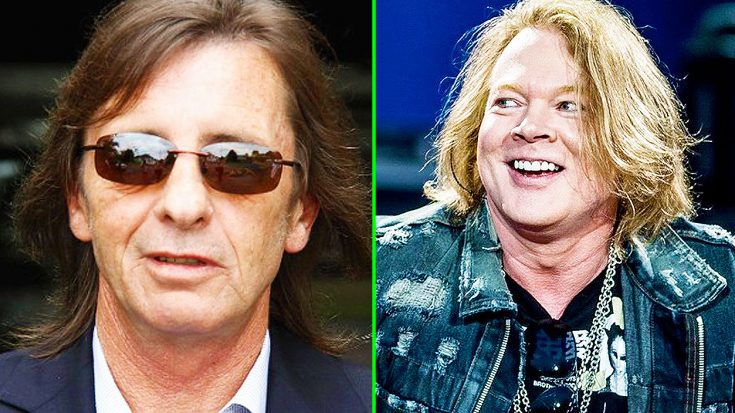 He had a change of heart

Last year, AC/DC made headlines when they announced their comeback. Fans were stoked to see the Australian rockers back on stage, but after a while, Brian Johnson was forced to leave the band due to complications with his hearing. Guns N’ Roses frontman Axl Rose took his place for the remainder of the band’s tour, and recieved mixed reviews.

One former AC/DC member however, was very critical of Axl’s presence in the band. Former drummer Phil Rudd was not satisfied with the choice to carry on the tour with Axl as the lead singer. But, after watching a few clips of his performances, Phil has backtracked on his original statements, and has said Axl actually sounds pretty great!

“[I] watched some clips the other day of Axl singing with the boys. I was surprised – it wasn’t too bad. I thought he did quite well, and that’s not an easy gig, mate. AC/DC is a tough gig for everyone in the band. I can’t say what’s on the horizon for AC/DC. I have seen, though, that Guns N’ Roses are playing over here in Wellington soon. They have a big tour all over the world. I wonder whether Angus would be happy to see Guns N’ Roses going out on a big tour, which means that AC/DC can’t go out on tour. We’ll see – you’d need a crystal ball to know what’s going to happen there.”- Rudd said.

Who knows, maybe Axl’s amazing job on vocals will coax Rudd into rejoining the band!? That would be something else, and something everyone could jump on board with!