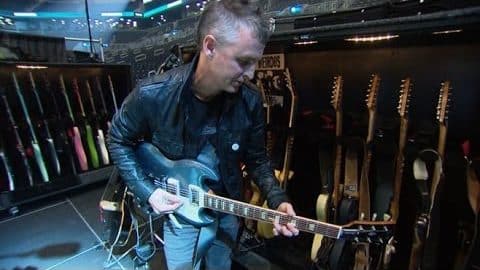 Watch The Trailer For The New Documentary

Stevie Ray Vaughan was a force to be reckoned with and his virtuosity always showed through in his live performances. So perhaps it comes as no surprise that he managed to influence and inspire the next generation of axeslingers – one of which was Pearl Jam’s Mike McCready. In the new documentary film titled Enormous: The Gorge Story, McCready recalled the time he saw SRV in concert at the Gorge.

“That was life-changing,” McCready said. “I had given up on music.”

At the time, he was struggling with his chosen path. And it wasn’t until he was in his early 20s when he finally took music seriously.

“It was fun, but it wasn’t really happening and I felt like, ‘I’ve got to figure out what I’m going to do here,’” he noted. “I was kind of lost.”

And so seeing SRV on stage was a watershed moment for him.

“After seeing him play here, that was an amazing kind of spiritual change for me,” he shared. “The next day, I was like, ‘I have to play the guitar again. I have to do it.’ That Stevie Ray Vaughan concert there at the Gorge put me back on the path to music. I know that for sure.”

Enormous: The Gorge Story will be shown for one night only on July 21.