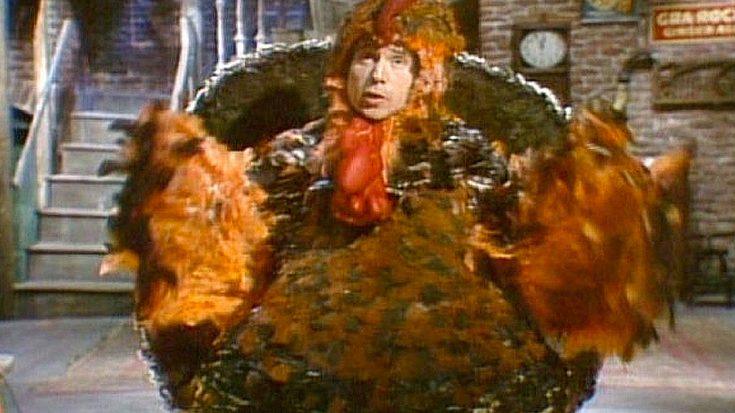 It’s been over 40 years since Paul Simon sang “Still Crazy After All These Years” on Saturday Night Live while dressed as a turkey, and it hasn’t gotten any less hilarious than it was the first time around.

Notorious for taking himself too seriously at times – something he even acknowledges in his opening monologue – Paul and the Saturday Night Live producers thought it would be a nice change of pace for fans who knew him as the straight laced folk singer known for classics like “The Boxer” and “Sound Of Silence” to see him let loose and be a little silly on national television.

The sketch itself isn’t funny because Paul is rocking a turkey costume – it’s funny because it’s one of the few times we got to see him poke fun at himself, welcoming the laughter as he waddled offstage towards his dressing room and got stuck in a doorway, effectively ruining his dramatic exit after encountering Saturday Night Live showrunner Lorne Michaels.

Honestly, how can you think of Thanksgiving without thinking of Paul Simon in a turkey suit?? #PaulSimon #SNL #Thanksgiving #Turkey #GobbleGobble

Relive this hilarious, fun moment in Saturday Night Live history by checking out the video below and if you suddenly find yourself humming “Still Crazy After All These Years” as you carve the turkey this evening, we hope you and your loved ones get to laughing about the time Paul Simon rocked a turkey costume.