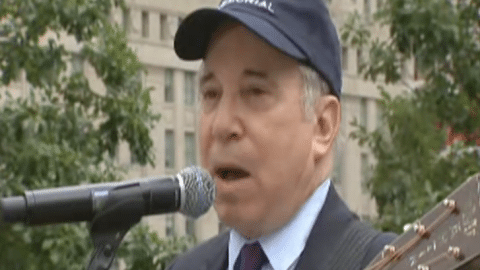 7 years ago, on the 11th of September in 2011, legendary singer/songwriter Paul Simon was invited to perform at Ground Zero for the 10th anniversary of 9/11. It was there that Paul delivered a humble, yet heartbreaking performance of the timeless hit “Sound of Silence”. The crowd was dead silent for the entire performance and some were even moved to tears, and after you hear this performance, you most likely will be moved to tears as well.

Usually performed alongside his lifelong friend Art Garfunkel, “Sound of Silence” is a song that even to this day is way ahead of its time. With lyrics that transcend generation after generation, this timeless hit remains one of the most studied and revered songs of all time. It has been covered more times than most songs on history and remains a cherished piece of pop culture history.

In this video you’ll see Paul Simon perform a touching tribute to this victims of the 9/11 attacks and a crowd moved to tears. Watch below and have tissues ready.