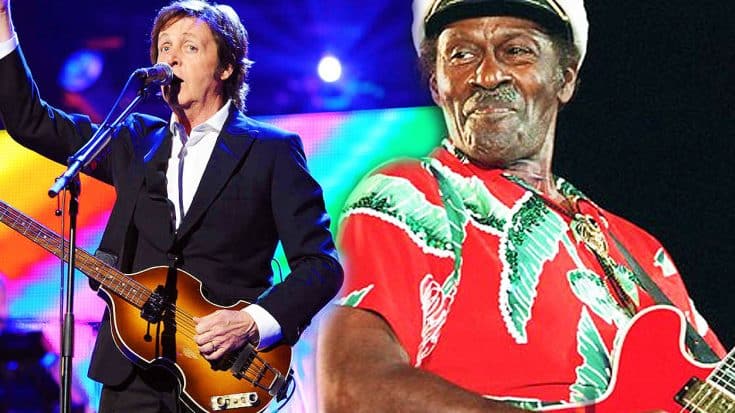 Over the weekend, we lost another rock n’ roll legend. Chuck Berry passed away from natural causes at the age of 90 years old. Many rock legends have taken the time to pay tribute to the great guitarist, singer and songwriter with touching letters and covers.

One of the more emotional tributes to Mr. Berry, was Beatle’s bassist and singer Paul McCartney. McCartney released a statement on Monday about Chuck, and it’s pretty emotional. It talks about the first time he met and heard Berry, and even references the multiple times they crossed paths and collaborated with each other.

“Chuck Berry sadly passed away over the weekend. He was one of rock ‘n’ roll’s greatest poets. He will be missed but remembered by everyone who ever loved rock ‘n’ roll.
“From the first minute we heard the great guitar intro to ‘Sweet Little Sixteen’ we became fans of the great Chuck Berry. His stories were more like poems than lyrics – the likes of ‘Johnny B Goode’ or ‘Maybellene’. To us he was a magician making music that was exotic yet normal at the same time. We learnt so many things from him which led us into a dream world of rock ‘n’ roll music.
“Chuck was and is forever more one of rock ‘n’ roll’s greatest legends all over the world. I was privileged to meet him in his home town St Louis when I played there on tour and it’s a memory I will cherish forever. It’s not really possible to sum up what he meant to all us young guys growing up in Liverpool but I can give it a try.”

Our thoughts and prayers are with Chuck Berry, his friends, family, and the music world during this difficult time. R.I.P. Chuck, and thank you for the wonderful music!