Patti Smith Hits The Tonight Show With An Epic, Rallying Performance of Her Classic ‘People Have The Power’ 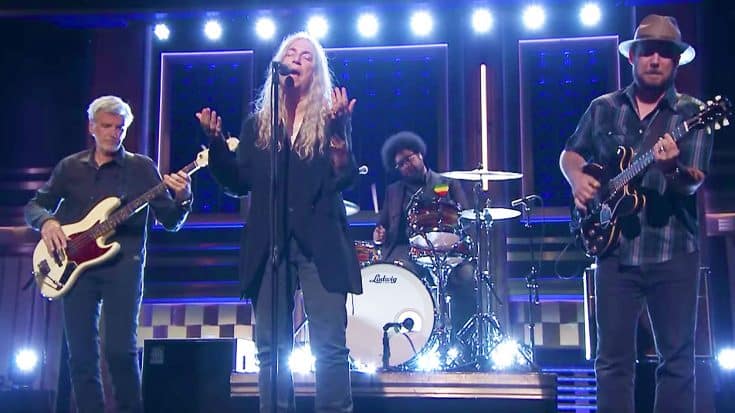 take the power back!

There are very few in the music industry that compare to Patti Smith. Patti has excelled in everything, from music, writing and poetry, she has always been an iconic voice for the people, and has always rallied against the establishment to remind everyone to remain true to themselves.

This week, Patti took her talent and message to the Tonight Show with Jimmy Fallon to promote her upcoming performance at Central Park to honor her late husband, and turned in a fabulous, anthemic performance of her classic hit “People Have The Power.” Her performance is inspiring, and any rock fan will feel uplifted after they watch it! Her message is powerful, and much needed during this day in age.

Fun Fact: This song was written by Patti Smith and her late husband, Fred “Sonic” Smith. Patti told NME how they tried to infuse the spirit of the ’60s into a modern protest song: “We had both protested the Vietnam War when we were young. We had been part of the ’60s, where our cultural voice was really strong, and we were trying to write a song that would reintroduce that kind of energy. It’s sad for me but quite beautiful. It was really Fred’s song – even though I wrote the words, he wrote the music; the concept was his, and he wanted it to be a song that people sang all over the world to inspire them for different causes. And he didn’t live to see that happen, but I have. I’ve seen people. I’ve walked in marches all over the world where people spontaneously started singing it, you know, whether it’s been in Paris or with the Palestinians or, you know, in Spain or New York City, Washington D.C. – and it’s so moving for me to see his dream realized.“

Check out the awesome performance down below and let us know what you think!