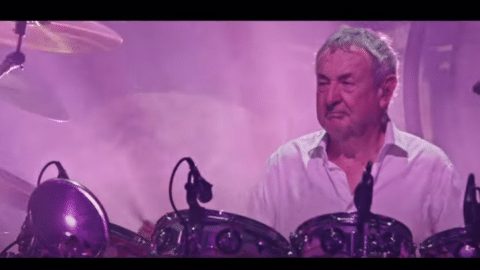 via Nick Mason's Saucerful of Secrets/YouTube

Since most of Pink Floyd’s audience is more familiar with the band’s major commercial-hit tracks, such as those included in 1973’s The Dark Side of the Moon and 1979’s The Wall, making their early works with former vocalist Syd Barrett remain relatively unfamiliar.

As per his recent interview, that’s one thing that Mason wants to change. The drummer shared that the majority of the American fans thought that it was Dark Side that gave Pink Floyd the debut. Mason explained:

“I think in America particularly, there’s still a belief that Pink Floyd started with ‘Dark Side of the Moon,’ and so there was almost like a fresh audience for the early material.”

Mason’s goal with his solo band, Nick Mason’s Saucerful Of Secrets, is not to become a tribute act to his former group, but to change the stage dynamic by performing the way Pink Floyd used to be in 1967 when Barrett was still the lead. The drummer said:

“What I wanted to do was restrict it a bit so we wouldn’t find ourselves becoming a tribute band doing ‘Comfortably Numb,’ ‘Another Brick in the Wall,’ and so on. We actually have more room to play the way we did in 1967, which was to play the song but actually have room to improvise a bit and change things on stage rather than in rehearsal.”