Neal Schon Is Asked If He’s Any Closer to Reuniting With Steve Perry – Unfortunately, His Answer Is… 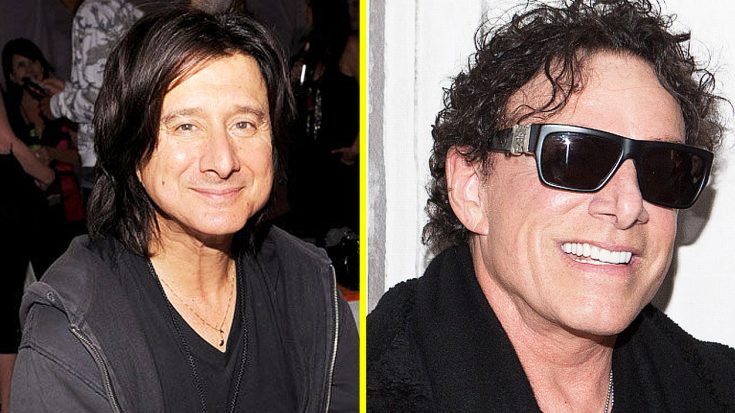 Things Are Not Looking Well For The Original Journey Line-Up

So here we are just months after it was announced that legendary rock band Journey will be inducted into the 2017 Rock & Roll Hall Of Fame and there is STILL uncertainty whether or not we will see Steve Perry team up with fellow Journey members. It’s very likely that Steve Perry will be at the event, but we do not yet know if he is slated to sing with the band. There’s been speculation, rumors, and everything in between, but the only people REALLY qualified to give a clear concise answer are Steve Perry and the members of Journey.

It’s no secret that the members of Journey, especially Neal Schon, have been trying their hardest to get Steve Perry to sing even just one song with them. Whether or not these efforts have been working at all is rather unclear, but recently Neal Schon unintentionally gave some incite, and let’s just say it’s not looking very good.

Neal Schon took to Twitter to respond to to a question posed by a fan regarding Steve Perry and let’s just say Neal Schon had some choice words. 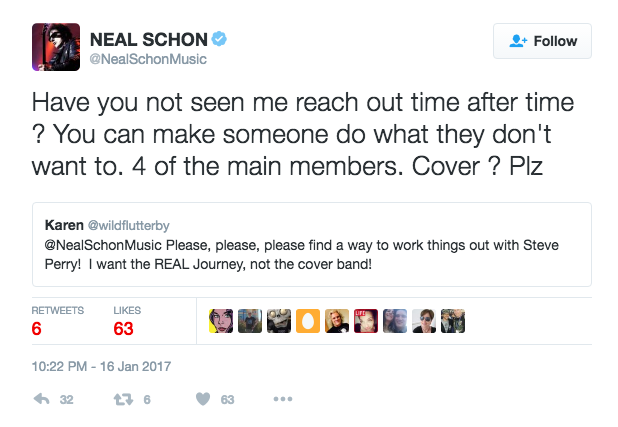 So there you have it. Now of course, this doesn’t exactly mean that a reunion is impossible, but as of now, it’s pretty apparent that Neal Schon hasn’t really gotten any further to recruiting Steve Perry for an official reunion. Again, we’ll see what happens at the induction ceremony, but as you can read in Neal’s tweet where he basically says that Steve Perry doesn’t want to sing with them anymore, it’s pretty obvious what Steve Perry’s intentions are. All we can do at this point is hope and pray for the best, but it’s better left said that only Steve Perry knows what’s best for him and we love him either way!