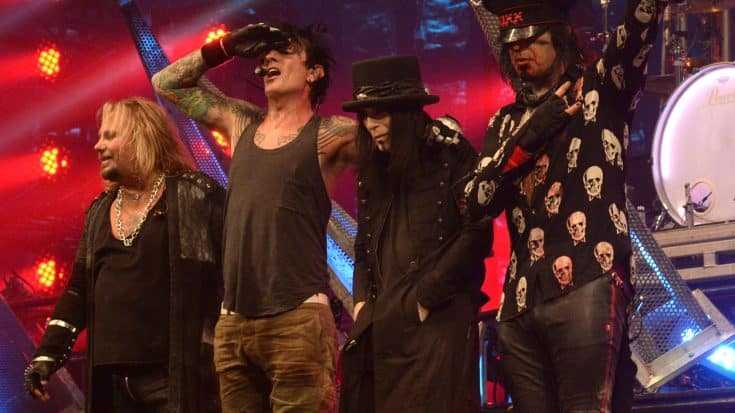 Mötley Crüe called it quits nearly two years ago and I don’t think I’ve ever seen four people more relieved than Tommy Lee, Vince Neil, Mick Mars and Nikki Sixx were when that curtain came down for the last time in the wee hours of January 1, 2016. These days, Nikki Sixx is all but completely retired from touring and enjoying his nightly radio show Sixx Sense and much needed time with his wife and children, but that sense of relief he felt when Mötley Crüe was finally over and done with still hasn’t left him. In fact…he’s pretty damn happy about it.

Citing the fact that he “no longer has to deal with the “drama” of being in a group with three other guys with completely “different ideas,” Sixx revealed to rock and roll comedian Dean Delray during an appearance on “Let There Be Talk” that the dysfunction of being four different people with four completely different ideas (like Tommy Lee’s desire to branch into hip-hop and EDM music) was draining and at the end of the day contributed to the dysfunction that drove the band apart.

“It became four men with different ideas,” he said. “Sometimes you have a band and you go, ‘There’s four guys with the same idea: Metallica.’ They were, like, ‘This is what we are. We are metal. It’s even in our name.’ Even though they had some crazy albums here and there, they figured it out. And towards the end, I think our version of figuring it out was, ‘Let’s just leave our legacy for what it was.'”

Despite being happy with the split overall, Nikki’s got one big regret: “When it ended, man, it didn’t end in a good way,” lining up with Lee’s chief complaint last year that the last days of Mötley Crüe were so stressful and unpleasant that four men who’d spent the better part of 3 decades in each other’s pockets were no longer even friends.

These days, though, Nikki’s in contact with most of his bandmates; whether it’s texting with Vince or checking in on Tommy (he’s reached out to Mick and has yet to hear back), it seems like time away from Mötley Crüe has softened him and his former bandmates, allowing room for some sort of positive relationship to bloom in its place.