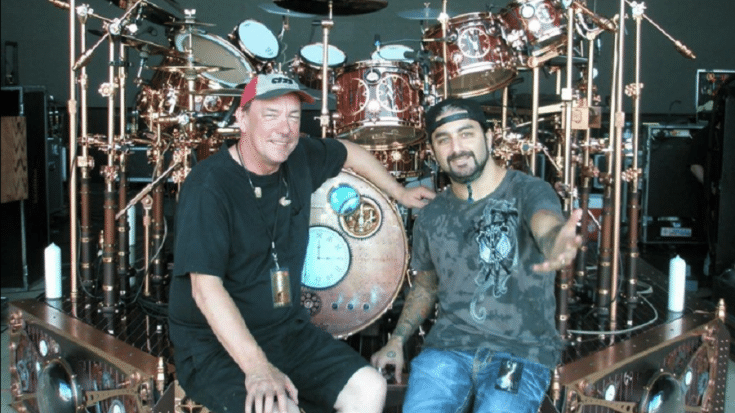 Mike Portnoy to Neil Peart: “A Mentor and A Hero”

Following the tragic news of Neil Peart’s passing, there have been tributes from fans and fellow musicians everywhere. Now the former drummer of Dream Theater Mike Portnoy took to social media to tip his hat to the legendary sticksman whom he referred to as “one of my greatest heroes of all time.”

On a Facebook, Portnoy posted a couple of photos of him and Peart. He then wrote on the caption: “Neil Peart will always be a mentor and a hero to me and his influence on me as a drummer for the past 40 years is absolutely impossible to measure.”

He adds, “But beyond that, over the past 15 years or so, he’s become a friend…always such a gentleman and a gracious host. Always inviting me to come to soundcheck and spend some time before the show whenever Rush was passing through. Always sending complimentary copies of his new books, or Holiday emails with pictures of he and his young daughter Olivia.”

Portnoy also shared one of the most special moments he shared with Peart: “I took my son Max to see Rush on their farewell tour as I wanted him to see the band before they retired…Neil ever the incredible gracious host invited us to soundcheck, let Max play his drums, gave him a pair of sticks and an autographed snare drum head and opened up his dressing room to us for the evening. The point is, if you were his guest you were family.”

Read the rest of his statement below.

Neil Peart died on January 7, Tuesday, following a three-year battle with the most aggressive form of brain cancer. His death was announced on Friday.