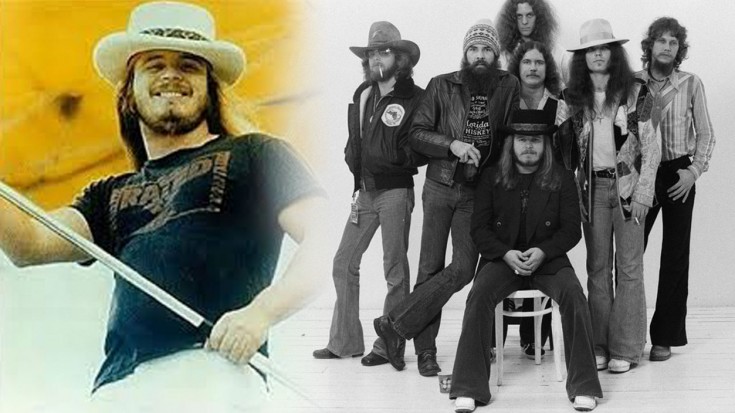 Barefoot and rocking out, this is why this performance of Lynyrd Skynyrds, “Gimmie Three Steps” has always been a favorite of mine. These guys are just so talented!!!

“Three Steps” is actually based on a true story. Gary, Skynyrd guitarist says it went something like this: Ronnie Van Zant, lead singer – was only about 18 and had been using a fake ID to get into bars. One day he wondered into a bar called “The little Brown Jug“…

Apparently Van Zant danced with a girl named Linda, whose boyfriend saw and was not happy about it. After approaching Ronnie he reached for what VZ assumed was a gun, and told him, “If you’re going to shoot me it’s going to be in the ass or the elbows… just gimme a few steps and I’ll be gone.”

I was cutting the rug
Down at a place called The Jug
With a girl named Linda Lu
When in walked a man
With a gun in his hand
And he was looking for you know who.
He said, “Hey there fellow,
With the hair colored yellow,
Watcha tryin’ to prove?
‘Cause that’s my woman there
And I’m a man who cares
And this might be all for you.”
I was scared and fearing for my life.
I was shakin’ like a leaf on a tree.
‘Cause he was lean, mean,
Big and bad, Lord,
Pointin’ that gun at me.
I said, “Wait a minute, mister,
I didn’t even kiss her.
Don’t want no trouble with you.
And I know you don’t owe me
But I wish you’d let me
Ask one favor from you.”

Well the crowd cleared away
And I began to pray
As the water fell on the floor.
And I’m telling you son,
Well, it ain’t no fun
Staring straight down a forty-four.
Well he turned and screamed at Linda Lu
And that’s the break I was looking for.
And you could hear me screaming a mile away
As I was headed out towards the door.