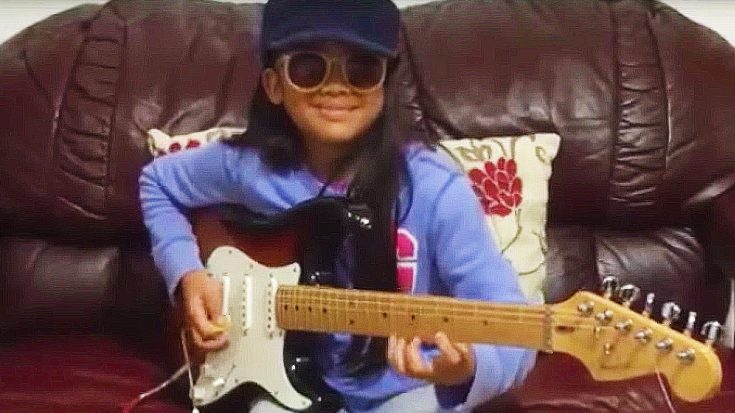 That Little Smile Says It All!

In a year where the rock world is saying goodbye to its greats at a truly alarming rate, there’s nothing that puts our fears to ease the way that watching the next generation of rockers emerge does. 10-year-old guitar sensation Krizten Centino is the latest in a long stream of talented teens taking the music world by storm via YouTube, and for good reason: she rocks! With only 2 years of playing under her tiny belt, Krizten more than proves her chops with her cover of Deep Purple’s “Highway Star,” blowing us away as she plugs in her Fender Stratocaster and proceeds to shred the hell out of Ritchie Blackmore’s iconic – and notoriously difficult – solo.

Fun Fact: “Highway Star” was born on a tour bus in 1971 when a reporter asked the band how they wrote songs. To demonstrate, guitarist Blackmore grabbed an acoustic guitar and began playing a riff consisting of a single “G” repeated over and over, while vocalist Ian Gillan improvised lyrics over the top.

While we love skilled guitarists – especially ones as young and fiercely determined as Krizten – what we love even more is watching guitarists have fun with their craft and little Krizten absolutely delivers in that regard, looking relaxed and happy during the entire video and serving up a toothy grin as she comes out of the latter part of the solo, her smile worth a thousand words. If you haven’t caught onto the fuss surrounding this talented young lady, now’s the time – be sure to check out Krizten’s cover of “Highway Star” in the video below, it’s one you don’t want to miss!