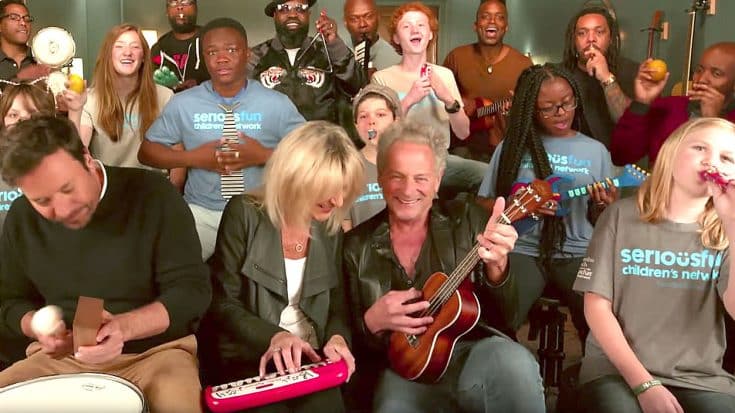 Buckingham And McVie Return To Youth With Elementary School Jam

These days, Fleetwood Mac’s Christine McVie and Lindsey Buckingham are a pretty busy pair. Their new album, titled Lindsey Buckingham Christine McVie, was released June 9th to critical acclaim and since then they’ve been in the news and dominating late night talk shows as 2/5 of Fleetwood Mac’s most successful incarnation carve a musical path for themselves. Last night’s episode of The Tonight Show Starring Jimmy Fallon found the duo joining forces with Fallon and his house band, The Roots, along with special guests from the SeriousFun Children’s Network for an absolutely adorable jam of Fleetwood Mac’s “Don’t Stop” performed entirely on children’s classroom instruments.

McVie and Buckingham sat directly in front, armed with a tiny children’s keyboard and a ukelele and guys, to say that it was fun to watch these two cut loose and enjoy the moment is an understatement; giggling in between verses and interacting with the small children around them, Buckingham and McVie are an absolute joy to watch as they remind us that at the end of the day, music is meant to do just that: inspire joy. We may not know who had more fun – Christine and Lindsey or the kids – but we do know that this is a video you’re absolutely going to love! Check it out in the video below and as always, enjoy!