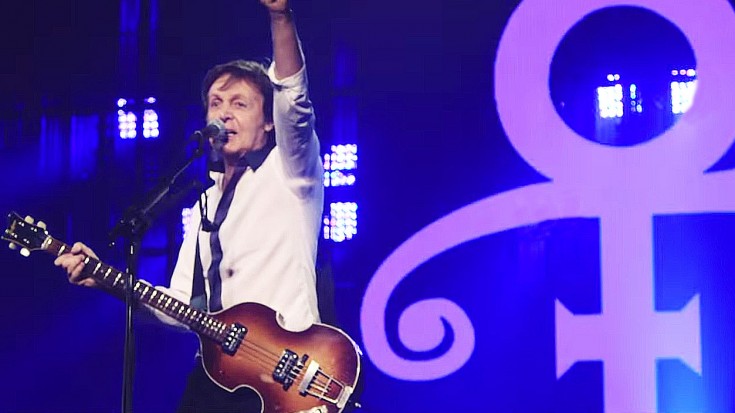 A Salute To Minnesota’s Hometown Hero

Paul McCartney promised that his One On One Tour would be an affair to remember and so far, he’s making good on that promise! Kicking off just a few short weeks ago with the debut of Beatles classics “A Hard Day’s Night” and “Love Me Do,” last night saw Macca’s One On One tour stop in Minneapolis, Minnesota where the former Beatle amped it up in honor of hometown hero Prince with a rockin’ take on 1984’s “Let’s Go Crazy”. A tremendous fan of Prince’s work, Paul was one of the first to take to Twitter two weeks ago to express his sorrow at the loss of the 57-year-old legend who died on April 21st at his Paisley Park estate, saying that he played “brilliantly funky music” when the two rang in the New Year together.

Saddened by Prince’s death. Proud to have seen in the New Year with him. He seemed fine and played brilliantly funky music.

It was magical: segueing out of “Hi Hi Hi,” Paul and his band suddenly launched into “Let’s Go Crazy” as Prince’s symbol appeared on the backdrop and it’s as if on cue, the fans in attendance last night quite literally went crazy in Prince’s honor!

Of all of the musical tributes to roll in since the musician’s passing, this is one of our favorites! Coming from a rock legend like Paul McCartney, this “Let’s Go Crazy” tribute in Prince’s hometown is a testament to both the man and musician Paul is, and we know that wherever Prince is he was thrilled to see his music still bringing people together in the name of a good time.