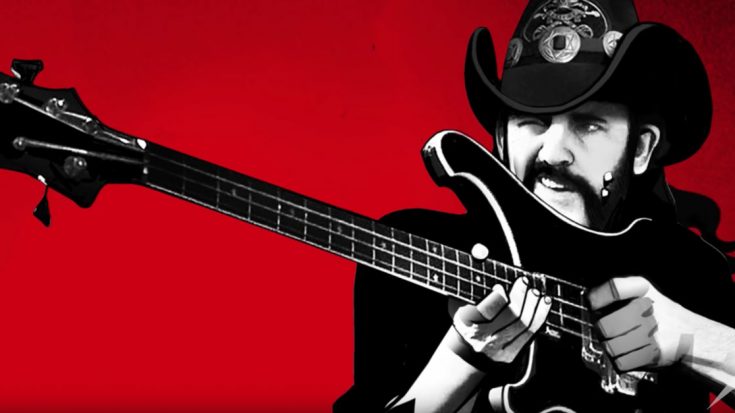 I think we can all agree that Motörhead’s Lemmy Kilmister wasn’t just a man – he was a legend. From his bass amp lovingly referred to as “Murder One,” to his signature look and the Jack and Cokes he was hardly seen without, Lemmy was this larger than life character whose influence was felt throughout every corner of the rock community, sending fans and friends alike scrambling to pay tribute to their friend and idol when he died at 70 on December 28, 2015. One such band that tipped their hats and threw back a shot or two in his honor was Metallica, who immortalized the late rocker in a brand new music video for their tribute song “Murder One” from their new album Hardwired…To Self Destruct.

“He helped us a lot. He was unafraid. And he was a character. And he was himself … He did his own thing to the last breath. No matter who you are, how could you not be inspired by that?”

A surreal, animated trip shot in bold shades of red, black, and white, the video for “Murder One” chronicles Lemmy’s life and subsequent rise to fame, opening in 1975 to the sight of Lemmy being left behind at the Canadian border by his former Hawkwind bandmates. It ends, of course, with animated shots of Lemmy playing his bass and ultimately grinning at the camera with a cigarette between his lips and his middle finger pointed at the viewer. As far as tributes go, “Murder One” is personal without being presumptuous, and beautifully showcases the years Lemmy Kilmister spent taking over the world with his bold and brash personality set to the soundtrack of the music he went to his death creating; somehow, we think he would have wanted it that way.