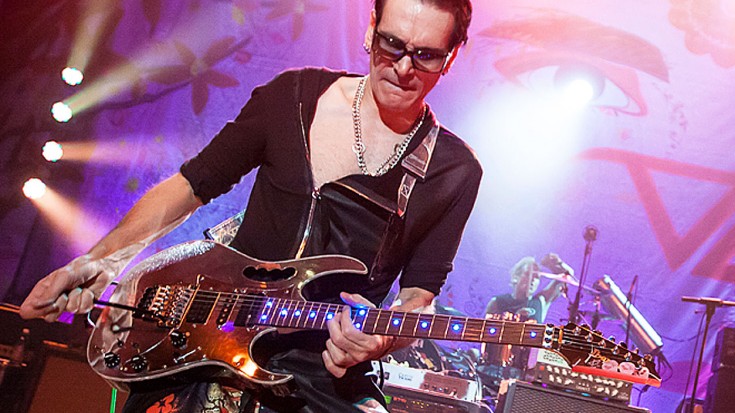 We’ve been fans of Steve Vai as far back as his days spent working with Frank Zappa – and by the sound of things, critics feel same way, hailing Vai as a “highly individualistic [guitar] player” and celebrating his gift for songwriting, guitar playing, composing, and producing. His eighth studio album The Story Of Light was met with critical acclaim upon its 2012 release, and fans saw Steve hit the road shortly thereafter for The Story Of Light Tour – an international romp through Vai’s biggest hits and fan favorites that spanned two years with over 200 shows played worldwide.

While the staples of any Steve Vai concert were covered – “For The Love Of God” and the arresting “Sisters” from Passion and Warfare, it was “Building The Church” from 2005’s Real Illusions: Reflections that proved to be one of the most explosive moments of the night.

Fun Fact: On March 3rd, 2011 Vai staged the world’s largest online guitar lesson for the online campus of the Berklee College of Music, virtually instructing 4,455 students in the first 15 minutes.

Filmed live at Los Angeles’ Club Nokia and immortalized on Vai’s concert film Stillness In Motion: Vai Live In LA, “Building The Church” is 6 minutes of everything we’ve come to love about Steve.

His interstellar stage presence paired with the limitless passion and intensity poured into this song about a creature named Pomposh who blows into town and seduces it’s people to see and speak of their inner selves things that they were not aware of makes for the perfect gravity storm needed to shake Vai’s audience down to their core and out of their seats. Armed with his mirror Ibanez JEM guitar “Bo” and a kaleidoscope of insane lights, Steve takes you on an impossible journey to a place you’ve never been – and after this video, you won’t want to come back to earth.