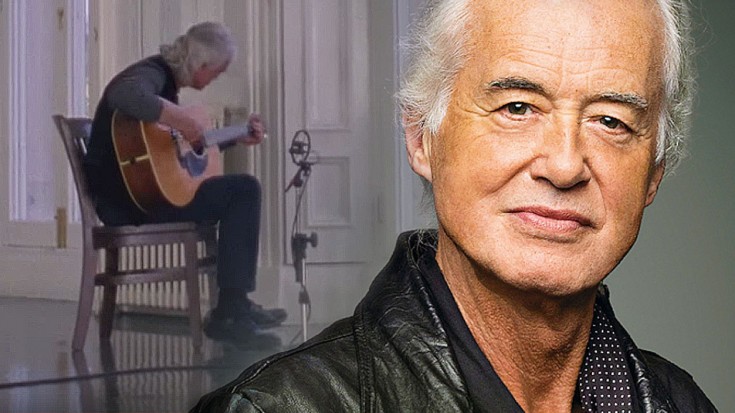 In 2008, rock legend and all around guitar god Jimmy Page sat down for It Might Get Loud – a documentary by filmmaker Davis Guggenheim chronicling the styles and careers of Page, Jack White, and U2’s The Edge. For nearly two hours, fans of Jimmy Page’s work get to hear him discuss the skiffle and blues music that influenced him from Headley Grange, the site where the iconic “Stairway To Heaven” came together; It Might Get Loud is an absolute must-see for rock fans, but the real treat for Zeppelin fans comes in the form of the film’s outtakes!

In this outtake from the film, Jimmy is found alone in a large room playing an acoustic jam that sounds like something improvised on the spot – in fact, it looks like filmmaker Davis Guggenheim caught Page off guard and during a private moment where the legend is burning off a little extra steam at the end of a take and letting his heart and fingers guide his playing, no real direction but still creating something wonderfully strange and incredibly awesome.

Fun Fact: Fleetwood Mac referred the boys to East Hampshire’s Headley Grange to finish recording the rest of Led Zeppelin IV, a decision that greatly impacted the sound of the album.

Jimmy’s acoustic jam is less polished than anything we’ve heard from him, but that’s what makes it so gorgeous – for the first time, we get to see the wheels turning in his head as he puts together this little interlude, and any time we get to watch this genius at work is indeed a good one.

Check it out in the footage below!