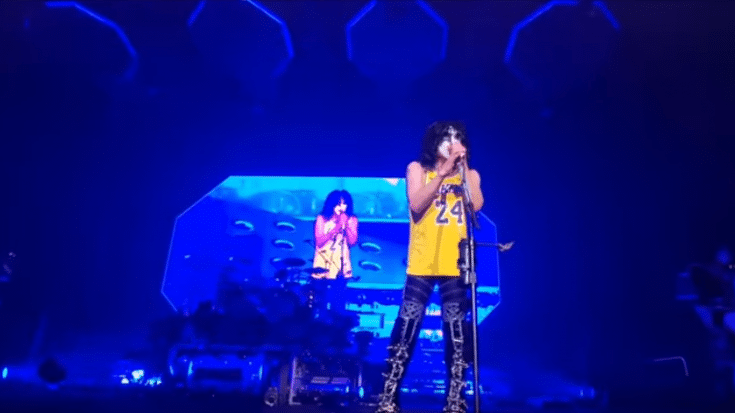 Paul Stanley Even Wore A No. 24 Jersey Instead of His Usual Outfit

At a concert in Los Angeles’ Staples Center on Wednesday March 4, KISS paid tribute to basketball legend Kobe Bryant who died on January 26 during a helicopter crash in Calabasas, California along with his 13-year old daughter Gigi and nine others.

For the encore, Paul Stanley wore a yellow Los Angeles Lakers #24 jersey and told the crowd: “We’re in the house that Kobe built. None of us would be here if this place wasn’t really like a memorial to somebody who’s so much more than a basketball player, somebody who’s been a role model. And tonight, I think we dedicate this show not only to Kobe and his daughter Gigi, but all the people who perished on that helicopter.”

The band then proceeded to perform their 1976 classic hit “Do You Love Me?”

The rest of the set isn’t any different from their other shows. On the day Bryant died, Stanley took to Twitter to share a photo of him and Bryant in Staples Center and wrote: “WOW! Kobe. Such A Shock. My Condolences To His Wife And Children. Very, very sad. #KobeBryant”

Check out both the tweet and video of their performance below.

WOW! Kobe. Such A Shock. My Condolences To His Wife And Children. Very, very sad. #KobeBryant pic.twitter.com/4UM6Vap8Dc