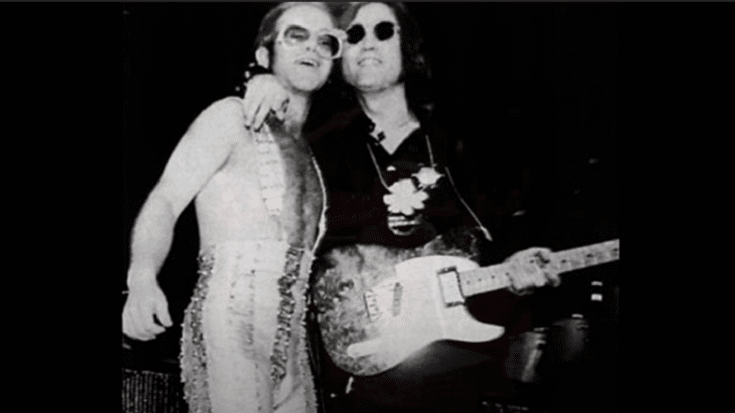 On November 28, 1974 at Madison Square Garden in New York City, John Lennon performed live for the last time and it was all because he lost a bet with Elton John.

Elton John sang and played the piano on “Surprise Surprise (Sweet Bird of Paradox)” and “Whatever Gets You Thru the Night” from Lennon’s 1974 album titled “Walls and Bridges.” At the time, Lennon was the only Beatle without a #1 single post-disbandment. Elton John, however, claimed that “Whatever Gets You Thru the Night” will top the charts. Lennon didn’t think so which is why they made a wager – and if Lennon lost, he’d join Elton John on stage.

Lennon later recalled to David Sheff, “He sang harmony on it and he really did a damn good job. So, I sort of halfheartedly promised that if ‘Whatever Gets You Thru the Night’ became No. 1, which I had no reason to expect, I’d do Madison Square Garden with him. So one day Elton called and said, ‘Remember when you promised …'”

With his black Fender Telecaster, Lennon surprised the audience halfway through Elton John’s set and performed three songs – “Whatever Gets You Thru the Night”, “Lucy in the Sky With Diamonds”, and “I Saw Her Standing There”.

Lennon also added that “it meant a lot to me and it meant a hell of a lot to Elton.”

Six years later, John Lennon died after he was shot in front of his apartment building.