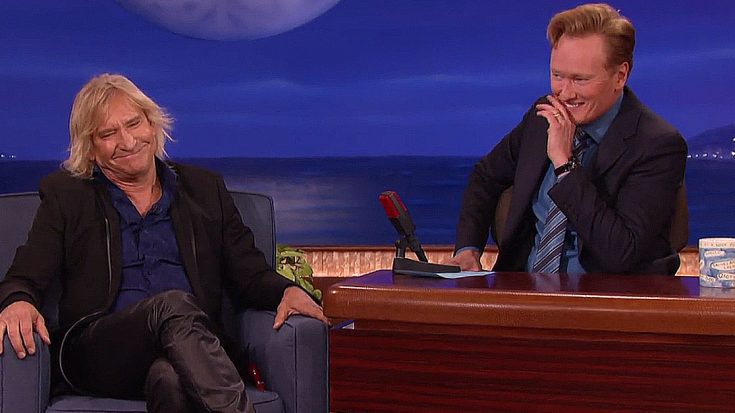 “It Was An Expensive Song…”

You probably already knew this, but indulge us anyway: Joe Walsh is a funny, funny man. As in, he’s as great at making you laugh as he is at making his guitar sing night after night, and we would give anything to just sit with him over a cup of coffee and listen to him tell story after story after story. Last week fans got a healthy dose of Joe’s brand of humor when he appeared on Conan, where the 68 year old rock legend performed “Rocky Mountain Way” – but, not before he told Conan O’Brien and the show’s viewers the hilarious (and expensive) story behind the 1973 smash hit.

As the story goes, Joe had just left The James Gang and resided in Boulder, Colorado where he was hard at work on his first solo album. Doubting himself and stressed out about crafting lyrics for this new song he had an instrumental track for, Joe found himself mowing his lawn when a look up at the Rocky Mountains resulted in a stroke of genius:

“I got the words! All at once! So I ran into the house to write the words down…but the lawnmower kept goin’. Into the neighbor lady’s garden. It was an expensive song.”

We’re not sure how much Joe had to shell out for the damage caused by his lawnmower, but judging by the success he’s found with “Rocky Mountain Way,” a few trips to Home Depot and a brand new garden were well worth it! Hear it straight from the man himself by watching the video below – you won’t regret it!