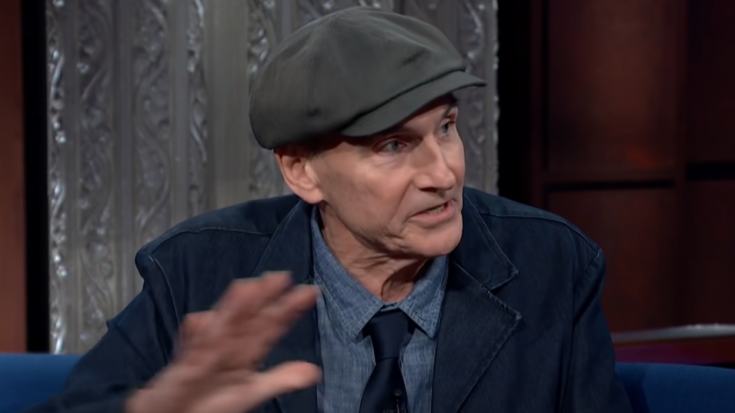 James Taylor talks about being in the studio with the Beatles and how his music career all started.

In his recent guest appearance on The Late Show with Stephen Colbert, Taylor shared what was it like to infiltrate the music scene in the late ’60s:

“To be in London in 1968 and to be signed and recording with The Beatles, seeing them every day in the studio… you know, it was just good luck. But of course, it followed a number of years of bad luck. I was introduced to Peter Asher, who had been a part of the British invasion of Peter and Gordon. He’s the one who gave me my big break.

“He had just signed on as head of A & R, which is essentially a talent scout. He was looking for people to sign. It couldn’t have been better-timed. I went over to visit Peter, and I played him my little demo. It was on a reel-to-reel tape and he liked it. He gave me a guitar, and I played a few other things. Ultimately, he said, ‘Yeah, that sounds good. Let’s go to Apple and see if we can interest a Beatle in it.'”

He continued about playing a song for the Beatles:

“Paul McCartney and George Harrison were there, and the way Peter remembers it is that we went into a room in Baker Street, which is where the Apple offices were at that point. Peter leaned out of the door into the hallway and said, ‘Is there a Beatle in the house?’ and it turned out there were two Beatles. But Peter said, ‘Listen, I’ve got this guy here. I’d like to sign him to the label, so let’s take a listen.’ I played “Something in The Way She Moves” to George and Paul. I don’t actually remember anything about it.

“Paul does remember it vaguely because they had a lot going on.”

And when the Fab Four recorded their iconic White Album, he shared:

“They used to record it at Abbey Road, but Abbey Road didn’t have an 8-track machine, and there was only one 8-track machine in Britain at the time. And that was at a studio called Trident, which was in Leicester Square. So The Beatles just booked it solid for a couple months, and we took the time they weren’t using.”