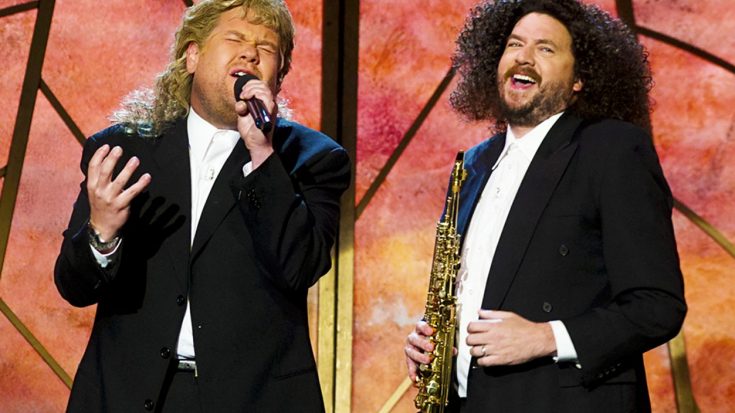 Check Out That Saxophone Solo

James Corden is no one trick pony. Sure, he’s cemented his place at the top of the late night television food chain with his star studded Carpool Karaoke segments, but Corden’s creativity as the host of The Late Late Show extends far beyond his joy rides through Hollywood and finds him dishing out hilarious parodies of pop culture moments you thought you’d forgotten, often enlisting his special guests to aid in his pursuit of laughs and nostalgia. One of our favorite moments from The Late Late Show came when Corden, sporting a comically nineties mullet and a dark suit, joined forces with Eastbound And Down star Danny McBride for a particularly funny remake of Michael Bolton’s now iconic duet with Kenny G. at the 1990 Grammy Awards.

Fun Fact: The release of “How Am I Supposed To Live Without You” marked a turning point in Bolton’s career. After years of being primarily known as a songwriter, the single got him recognition as a performer and made him a certified superstar.

Playing Bolton, Corden serves up a pretty convincing rendition of the singer’s 1989 smash hit “How Am I Supposed To Live Without You” as McBride, sporting a curly black wig and a toy saxophone faithfully took on the role of Kenny G. and dished out some pretty sweet fake sax playing that managed to be every bit as funny as it was terrible. What really sells this ‘performance,’ however, is actual footage of 1990 Grammy Awards attendees included in the segment, complete with Liza Minnelli laughing and clapping and R&B act Boyz II Men giving the pair a standing ovation. The attention to detail makes James and Danny’s fun, faithful remake even more incredible and if you don’t believe us, we’ve included the original video below for you to compare the two – see how many (if any) differences you can spot!