It’s Official: Elton John Is The King Of Wedding Gifts, And This Sweet Story From The Royal Wedding Proves It 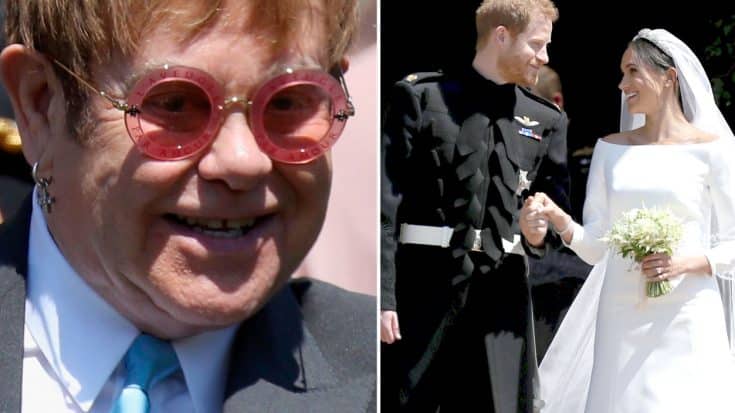 Elton John Gives Royal Couple Once In A Lifetime Gift

Unless you live under a rock, it’s hard to have missed this weekend’s anxiously awaited royal wedding. Prince Harry and Suits star Meghan Markle tied the knot in a lavish ceremony Saturday morning, becoming the Duke and Duchess of Sussex as over 50 million people watched at home.

Sealed with a kiss #RoyalWedding pic.twitter.com/Fte9MwM4K4

What you didn’t see, however, were the festivities that took place later on.

The new royal couple kicked off their brand new chapter as husband and wife with two equally lavish receptions; one subdued luncheon hosted by the Queen, followed by an all-star bash later that evening that included wedding guest and actor Idris Elba on the 1’s and 2’s, DJing for Meghan and Harry’s friends and family until the sun came up.

Their celebration wouldn’t have been complete without one special friend and wedding guest, though. Sir Elton John was in attendance, decked out in a smart suit with his signature wacky sunglasses as he serenaded Harry and Meghan at their luncheon reception, a wedding gift sweet enough to warm even the iciest of hearts. The 71-year-old legend dusted off classics like “Circle Of Life,” “Tiny Dancer,” and “I’m Still Standing,” but it was his rendition of “Your Song” that proved to be the perfect soundtrack to their special day.

This isn’t the first time Elton has come out in support of the royal family.

A longtime friend of late Princess Diana, Elton famously performed “Candle in the Wind” at her funeral in 1997 and remained a close friend of the family ever since. In 2011, John performed “Your Song” when Prince William wed Kate Middleton.

Personally asked by Prince Harry to perform on his big day, Elton John knew early on that what he and Meghan had was something special.

“I could tell that he was totally in love,” John said. “He didn’t really discuss much personally but he said ‘I’m in love’ and I thought ‘good for you.’ Both of those boys seem to be ecstatically happy and that’s all you want people to be.”

And ecstatically happy he is.

Congratulations to the happy couple!