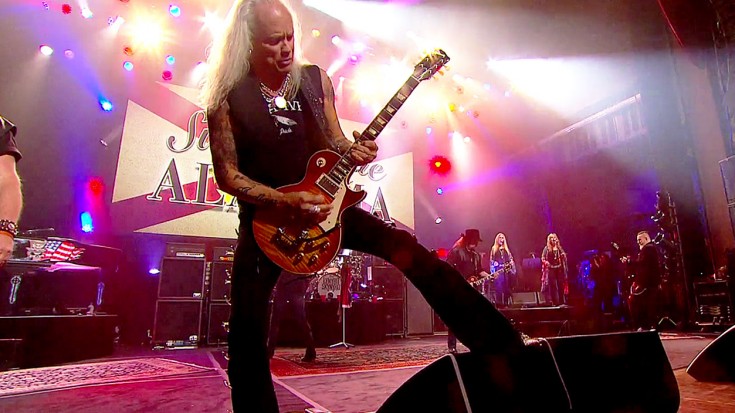 dailymotion.com via EagleRockTV and Lynyrd Skynyrd

Every Lynyrd Skynyrd fan knows: the party isn’t over until Lynyrd Skynyrd turn it up for the song that started it all, ‘Sweet Home Alabama’ – and on the final night of the band’s historic two-night run at Jacksonville’s Florida Theatre that is exactly what they did! Lynyrd Skynyrd made history when they performed their first two studio albums Pronounced ‘Lĕh-‘nérd ‘Skin-‘nérd (1973) and Second Helping (1974) live in their entirety for the very first time, delighting their audience with a catalog of songs that had never been performed live or in some cases, hadn’t been done live in decades.

Of course, the night wouldn’t have been the same without the songs that helped define a generation, especially Second Helping’s smash hit ‘Sweet Home Alabama’. To say that Lynyrd Skynyrd light up when the opening strains of ‘Sweet Home Alabama’ are played is an understatement – these guys are absolutely electric!

What a timeless classic performed by some of Jacksonville’s hometown heroes. If you couldn’t be there to witness the greatness and soak up ‘Sweet Home Alabama’s southern comfort, never fear: this live footage from Lynyrd Skynyrd’s brand new concert film  Pronounced ‘Lĕh-‘nérd ‘Skin-‘nérd & Second Helping Live will more than make up for it!