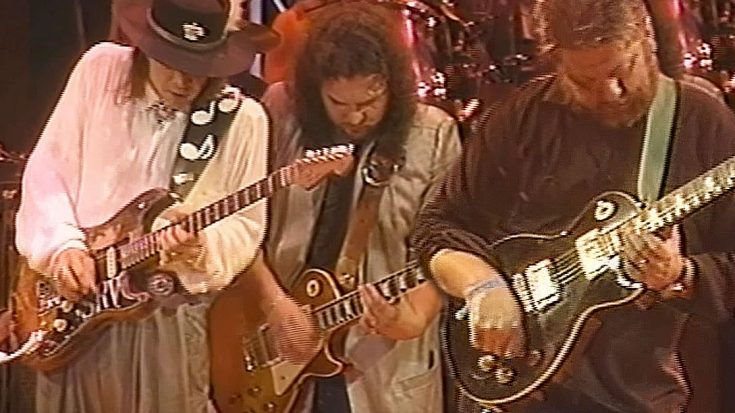 Before Lynyrd Skynyrd took their final bow for the night at Charlie Daniels’ iconic Volunteer Jam on September 6, 1987, they hit the stage one last time with all of the night’s acts for a rowdy, rockin’ take on “Good Ole Gospel Ship” where, in his infinite wisdom, Charlie Daniels had everyone on stage dazzle the crowd and each other with a solo or two. Gary Rossington, who had just shared a few licks with late Texas blues legend Stevie Ray Vaughan, was once again thrust into the spotlight for two blistering solos that beautifully blended rock, blues, and gospel together for one absolutely delicious creation before being joined again by Stevie Ray Vaughan and later, Marshall Tucker Band’s Toy Caldwell.

Fun Fact: Born in 1974, the Volunteer Jam originally began as a means for the Charlie Daniels Band to finish up their latest album Fire On the Mountain.

Even Leon Wilkeson and Billy Powell were given their moments in the sun, delivering bass and piano solos that reminded the world exactly why when it comes to rhythm sections, Lynyrd Skynyrd are unmatched! A virtual “who’s who” of Southern rock and blues legends, this performance is one for the ages and if you missed out on this momentous occasion, never fear – we’ve got it all here for you in the footage below, so feel free to give it a watch and enjoy!