Iron Maiden Play “Hallowed Be Thy Name” Live In ’85, And Guitarist Dave Murray Is A Beast 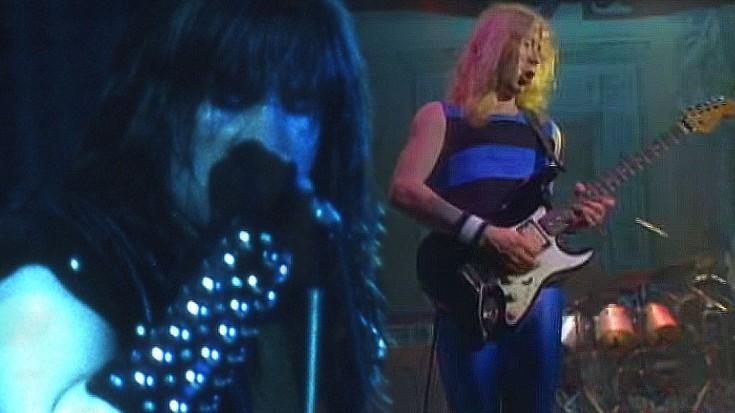 “Life Down Here Is Just A Strange Illusion”

With over 85 million records sold and a reputation as being one of the greatest heavy metal bands to ever step onto a stage due to their killer live performances, it’s clear that Iron Maiden made a tremendous impact on music during the course of their 40 year career!

1982’s masterpiece The Number Of The Beast featured gems like ‘Hallowed Be Thy Name’ – an epic philosophical tale of a man awaiting his turn at the gallows that Bruce Dickinson describes as “fantastic”. It runs over 7 minutes long and features blistering solos by both Dave Murray and Adrian Smith, and it’s widely regarded as one of the greatest heavy metal songs of all time.

Written by bass player Steve Harris, ‘Hallowed Be Thy Name’ has remained in almost all of the band’s set-lists since the album’s recording, the only exception being the Maiden England World Tour 2012–14.

‘Hallowed Be Thy Name’ is one of those songs that sums up everything great about metal – it’s brutal in the band’s approach, heavy without coming across as muddy, and then newcomer Bruce Dickinson’s impressive vocal range is flanked by the phenomenal musicianship of his band members.

This is more or less the song that defines Iron Maiden’s place in the metal world as one of the most respected and successful bands, and it’s definitely one that’s stood the test of time!

+ Hallowed Be Thy Name lyrics +

I’m waiting in my cold cell, when the bell begins to chime
Reflecting on my past life and it doesn’t have much time
‘Cause at 5 O’clock they take me to the gallows pole,
The sands of time for me are running low, running low

Can it be that there’s some sort of error
Hard to stop the surmounting terror
Is it really the end, not some crazy dream?

As the guards march me out to the courtyard
Somebody cries from a cell, ‘God be with you’
If there’s a God then why has He let me go?

As I walk my life drifts before me
Though the end is near I’m not sorry
Catch my soul, it’s willing to fly away

Mark my words, believe my soul lives on
Don’t worry now that I have gone
Gone beyond to seek the truth, yeah, yeah